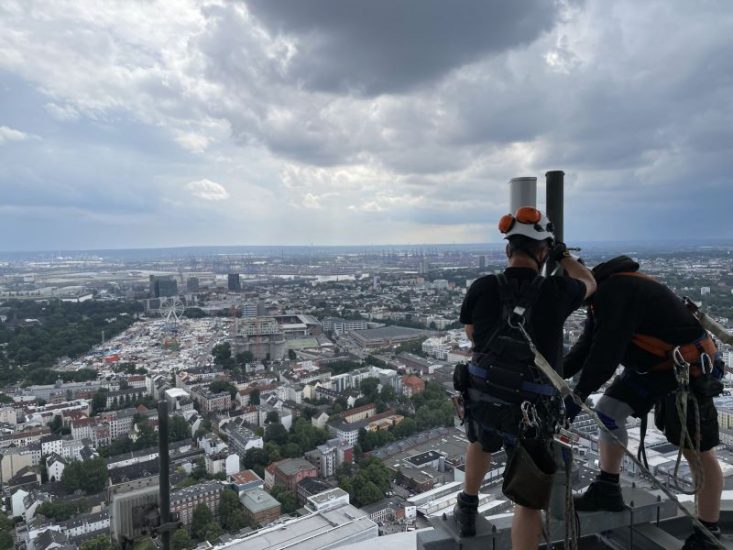 Project partners have announced the first test flights at U-space Sandbox Hamburg from mid-September. The aim of the project is to promote the commercial use of drones in Germany. The test flights kicked off with a maiden flight over the port of Hamburg. The project is being implemented by Droniq GmbH, Germany’s first company to integrate drones into the airspace, and its parent company DFS Deutsche Flugsicherung GmbH and is funded by the Federal Ministry of Transport and Digital Infrastructure (BMVI).

During the test flights, Droniq and DFS are transferring the mandatory services for the establishment of a geographical area for drone flights (U-space airspace), which will apply from 2023, into practice for the first time. In several flight scenarios, the safe and coordinated interaction of manned and unmanned air traffic in the U-space airspace established in Hamburg will be simulated, among other things.

This includes, for example, an emergency scenario in which the drone pilot has to avoid a helicopter flying into the test field at short notice. Other scenarios test several parallel drone flights including logon and logoff procedures, route planning and subsequent flight execution. The drone pilots are provided with a complete aerial situation picture for their flight. This enables pilots to recognise other air traffic participants up to date and in good time and to act accordingly.

In the live laboratory environment, Droniq takes on the role of the U-Space Service Provider (USSP), which coordinates drone traffic in U-space airspace. This mainly involves the electronic visibility of drones and other traffic in a common air situation display, as well as the allocation of flight permits for drones and the dynamic adjustment of airspace. For this purpose, Droniq uses the first fully operational traffic management system for drones (UTM) in Germany, which was developed by DFS. DFS also provides Droniq with the necessary airspace and air traffic data from manned aviation. In the project, DFS acts as the Common Information Service Provider (CISP) and, via Tower Hamburg, as the Air Navigation Service Provider (ANSP) responsible for air traffic control.

“To fully realise the economic potential of drones, they need to be easily and safely integrated into existing air traffic,” explains Droniq CEO Jan-Eric Putze. “The test flights mark the next step in achieving this. At the same time, it brings us closer to our goal of positioning Droniq as the first USSP throughout Germany.”

Michael Westhagemann, Senator for Economic Affairs and Innovation of the Free and Hanseatic City of Hamburg: “Hamburg already entered the drone age in 2016. Various projects have been launched since then, involving the transport of tissue samples by drone, a control centre to organise drone traffic or the defence against non-cooperative drones at airports. The safe integration of drones has been a top priority from the very beginning. The U-Space Sandbox – in close cooperation with numerous Hamburg partners – is an important milestone on the way to the regular use of drones, especially in the public interest, such as for the fire brigade or the transport of medical goods.”

The real laboratory covers 30 square kilometres in the airspace above the Port of Hamburg. The test flights take place over the area of Steinwerder as well as parts of Grasbrook. The U-Space demonstrator at the Port of Hamburg is the first German test field for cooperative and coordinated flight operations between unmanned and manned aviation. The BMVI is funding the establishment of Germany’s first U-Space real laboratory with just under 500,000 euros. The project is part of the Drone Action Plan presented by Federal Minister Scheuer in May 2020.