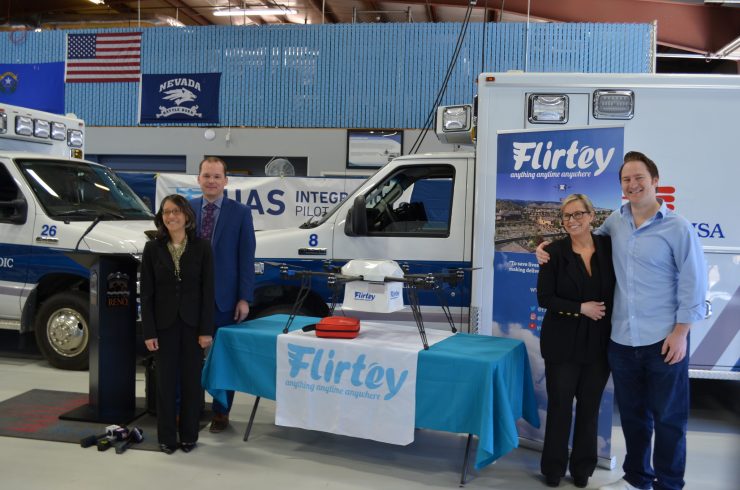 “The City of Reno is proud to partner with Flirtey, the FAA, and our local IPP partners to enable drone delivery of AEDs to Washoe County residents,” said City of Reno Mayor Hillary Schieve. “Public safety is our top priority, and the use of drones to provide life-saving AED technology to cardiac patients will save lives across our community.”

Flirtey and Reno are participants in the FAA’s Unmanned Aircraft Systems (UAS) Integration Pilot Program (IPP), a fast-track regulatory program that accelerates the integration of life-saving and commercial drone operations within the National Airspace System (NAS). The City of Reno chose Flirtey as its partner to deliver AEDs for the immediate treatment of a person experiencing cardiac arrest, and to pioneer a scalable model for commercial drone delivery.

According to a company press release: “Cardiac arrest is the leading cause of natural death in the United States. For every minute that a person experiencing cardiac arrest waits to receive defibrillation, his or her odds of survival decrease by about 10 percent. Deploying AEDs via drones can increase the average cardiac arrest survival rate from just 10 percent, to approximately 47 percent. Based on historical data, just one Flirtey delivery drone carrying an AED has the potential to save at least one life every two weeks in Reno. Deployed nationwide, Flirtey’s AED drone delivery service has the potential to save more than 100,000 lives per year and more than 1 million American lives over each decade to come.