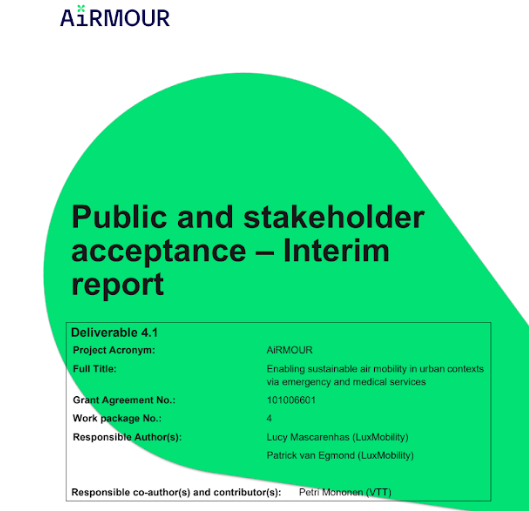 The European AiRMOUR research project has conducted a survey of over 1,000 citizens on drones and Urban Air Mobility (UAM). The survey examined public attitudes towards the use of delivery drones and passenger eVTOLs for emergency medical services. Respondents represented the six European countries involved in the AiRMOUR project: Finland, Sweden, Norway, Germany, Luxembourg and the Netherlands. The questions were related to topics such as safety and risk, privacy, environment, socio-economic impact and public acceptance of different emergency medical service use cases.

One of the key findings of the survey was that the public accepts drone usage for urgent medical services – in deliveries of a defibrillator or emergency medical personnel, for example – more easily than for non-urgent medical usage, such as deliveries of pharmacy products. However, infrastructure maintenance, land or building surveying and environmental monitoring were seen as the most acceptable use cases for drones.

“The reason for these findings could be because drones used for medical emergencies, or for maintenance, surveying or monitoring are considered less disturbing than for other uses as they are generally not very frequent, often operating in controlled or isolated environments’, says Senior Consultant Lucy Mascarenhas from the AiRMOUR partner LuxMoobility, which was in charge of conducting the survey.

Another finding, according to AiRMOUR project coordinator, Doctore Petri Mononen, Principal Scientist from VTT, Technical Research Centre of Finland, showed exposure to drones is likely to increase their acceptance. “The more common it is for the public to see professional drones in action, the less controversial the public perceives them.”

A higher level of knowledge increases comfort when new technologies are introduced to the public. The majority of citizens who responded to the AiRMOUR survey were either ‘not knowledgeable at all’ on the topic of Urban Air Mobility or they were ‘slightly knowledgeable’. People who were more knowledgeable and had been exposed to drones were more accepting of them and were more trusting and comfortable with the technology.

Social inequality appeared as a high concern for citizens. This differs from previous studies where inequality has not been highlighted as a concern. To help mitigate this concern the new drone services should benefit the whole of society, not just a select few. However, similarly to the previous studies, topics such as safety, privacy and noise are still the top concerns for citizens.

The AiRMOUR survey included interviews of fifteen experts from the fields of aviation, Urban Air Mobility, medical, government, communication and cyber-security, a technical stakeholder survey and a workshop. Experts were asked about acceptance of UAM with focused questions on the emergency medical use cases. They felt that regulations are currently the most limiting factor in the advancement of UAM.

According to Dr Mononen, the AiRMOUR project will continue to work on public acceptance as long as the project continues, which is the end of 2023. “We expect to greatly increase our survey respondents in 2023 and thereby gain even deeper knowledge on the best follow-up actions for municipalities and the industry”.