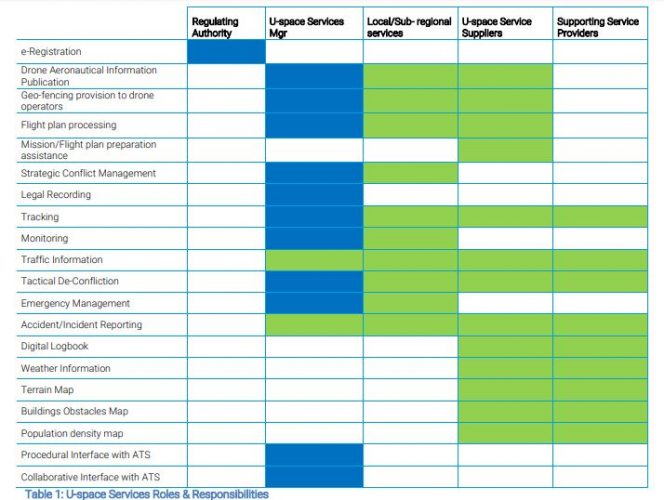 In a paper published on 7 May the A6 Alliance of air navigation service providers (ANSPs) has outlined its position on integrating UTM within ATM. In the same paper it set out a blueprint, based on SESAR JU CORUS concept of operations, of how UTM service provision should be organised in a competitive way within States.

“There is no clearly defined path towards the integration of manned and unmanned aircraft in uncontrolled airspace – the areas of airspace in which operators are not mandated to use air traffic control services. One of the greatest challenges in this area is that, today, not all users make themselves “visible” (i.e they do not transmit electronically their identity or location) and indeed, some are reluctant to do so. Although there’s no international consensus on how this should be addressed, it is worth stressing that without situational awareness of all manned aircraft it will be difficult to accommodate complex drone operations such as BVLOS and autonomous flights, which in turn limits the growth potential of drone based services.”

The A6 outlined a high-level architecture to support the evolution of U-space.  The architecture (see above) consists of the following roles:

“For reasons of national security, local authorities may require that repositories of airspace, tracking, e-registry, and mission plans (or flight plans) reside in the Member State territory, and possibly being managed by the state authority or by the U-space Services Manager. In this role, the U-space Services Manager could quickly and easily provide law enforcement authorities with critical information required by investigations, instead of depending on multiple service providers operating from different jurisdictions. Also of paramount relevance is that the U-space Services Manager will provide the interface to the national ATM system. This limits the number of interfaces to the ATM system, thereby reducing the threat from hostile cyber-attacks. A single interface, limited to the U-space Services Manager becomes an additional security barrier to isolate highly critical ATM systems from external threats. Avoids duplication: ANSPs continue to retain a core role in helping to ensure the safety of manned airspace users operating in the airspace. Increasing drone use is already forcing ANSPs to adopt measures that help to protect the safety of those existing airspace users.

“….Only ANSPs can ensure a procedural and collaborative ATM/ATC interface, and its related technologies, toward U-space.”