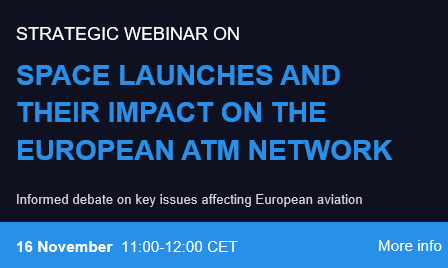 Small satellites are ushering in a new era of space capabilities, connecting us across vast distances, stimulating the global economy and expanding the limits of human knowledge. The growing global space launch market is reducing the cost and increasing the availability to put satellites into low earth orbit. Such satellites can help us monitor better climate change, bring the internet to underserved communities, and manage disaster recovery and much more besides.

The emphasis on small satellite constellations is increasing in Europe, with several planned launches in the pipeline. The first commercial spaceport is expected to enter into service in Cornwall, from where Virgin Orbit will launch. Other sites are also being considered across Europe for building operational launch pads, and we expect to see a significant increase in sub-orbital and orbital launches across Europe.

This growth trend is set to continue, increasing demand for access to higher airspace, and highlighting the importance of managing the integration of satellite launches with conventional air traffic in a safe, sustainable and efficient manner. Space operations at high altitude (satellite launches, re-entry, and space debris) need to be safely deconflicted with operations of other airspace users. From EUROCONTROL’s perspective, the impact of new airspace entrants such as small satellites on air traffic management operations and functions needs to be carefully identified.