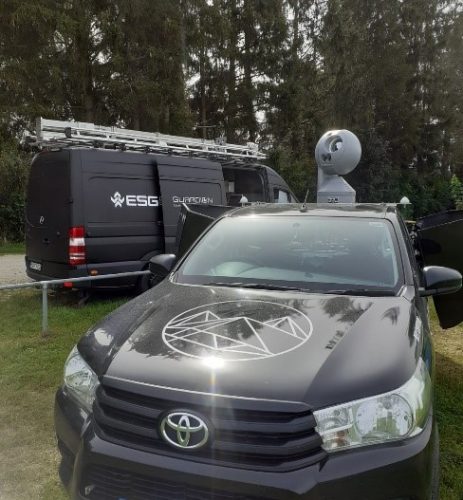 ESG Elektroniksystem- und Logistik-GmbH is testing the optical Unmanned Aircraft System (UAS) detection and tracking technology SkyTrack, developed by OpenWorks Engineering, as par of the GUARDION Counter UAS system. According to OpenWorks, during the testing in Bavaria in Germany, SkyTrack was able to autonomously detect, classify and track class 1 UAS up to 2km of range without input from the operator.

SkyTrack can be integrated with any type of UAS primary detection. Once the UAS is detected, location data is streamed to SkyTrack causing it to quickly react, finding the UAS in the sky using AI computer vision. High-definition daylight and infrared cameras are coupled to highly accurate controls allowing for autonomous confirmation of the UAS presence. Video is streamed directly to the operator.

SkyTrack can also provide fire control and target information to allow other effectors to be engaged autonomously. Effectors and weapon systems can also be mounted directly onto the SkyTrack pan/tilt system.

GUARDION, the Counter-UAS solution of ESG and its cooperation partners Rohde & Schwarz and Diehl Defence, is based on the mission-proven system used to secure major political events such as the G7 summit in Elmau in 2015, the state visit of President Obama in June 2016, the G20 summit in Hamburg in 2017 or the celebrations on the Day of German Unity 2018. All of the deployed technologies and products are linked together using a command and control system that was originally developed for the military: TARANIS by ESG.