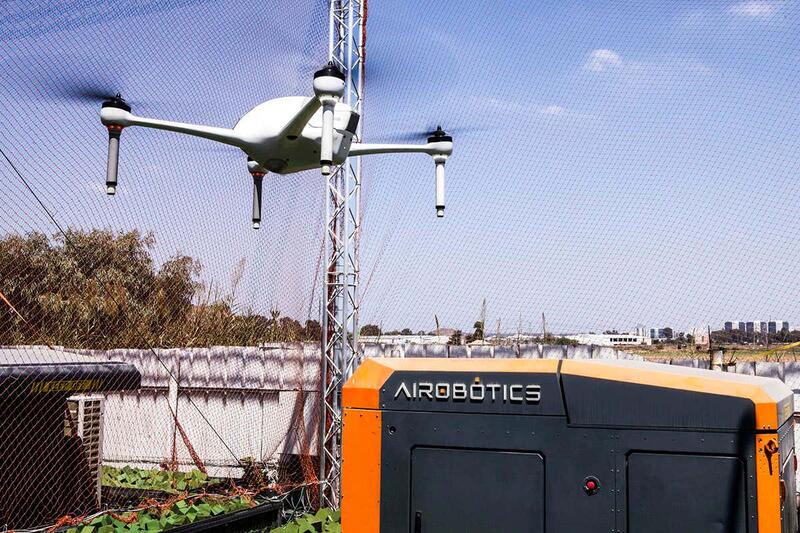 A network of pre-positioned drone bases across Dubai enables the police force to respond to an incident anywhere in the United Arab Emirates city, says a report by New Scientist.

The acticle says: “The quadcopters, supplied by Israeli company Airobotics, will operate from base stations during the Expo 2020 event starting in October this year, an exhibition said to be the third largest event in the world after the Olympics and the World Cup. The drones will reduce police response time from 4.4 minutes to 1 minute according to a tweet from Dubai’s ruler Sheikh Mohammed bin Rashid Al Maktoum.

“Each base has a sliding roof that allows the drones to enter and exit. The drones can fly pre-programmed patrols, or be dispatched to a specific location, allowing an operator at police headquarters to inspect the scene, or follow a suspicious individual or vehicle and pass data to other police units.

“At 1.8 metres wide, the quadcopters are larger than consumer drones. The base station relays communications and incorporates a robot arm to swap out the drone’s batteries, allowing it to land and take off immediately with no delay for recharging.

“Airobotics’s drones-in-a-box are already used at various sites in several countries, but this is the first time they have been used for citywide policing. In some places, they provides security, in others, the drones carry out industrial tasks, for example carrying out daily surveys of stockpiles of coal or phosphate from mines. Singapore deployed two Airobotics units last year to assist with Covid-19 lockdown compliance measures, to check reports of gatherings of people.

“Small drones are relatively cheap to purchase and maintain compared to crewed helicopters,” says Robert Bunker at C/O Futures, a US-based security consulting firm. “I do see the drone ISR [intelligence, surveillance, and reconnaissance] system as a model for other global cities.”

“The goal is definitely to model for other police forces globally, so they can see how this is the shortest and most efficient way to deal with emergencies,” said an Airobotics spokesperson.”