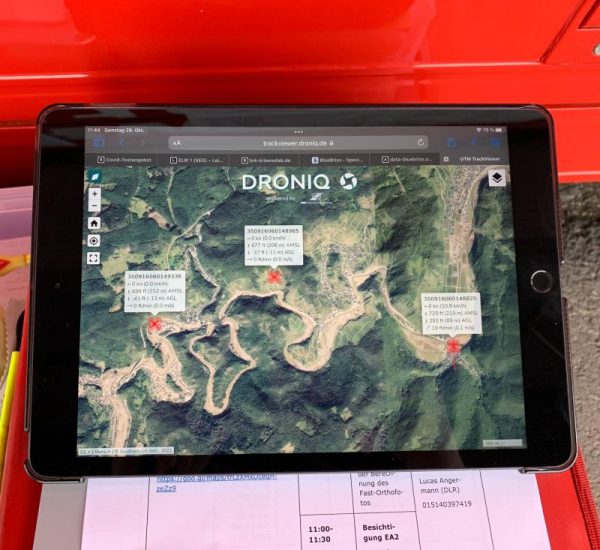 The German-Austrian joint project Artificial Intelligence for the Analysis and Fusion of Earth Observation and Internet Data for Decision Support in Disaster Management (AIFER) carried out a drone survey of the Ahr valley at the end of October. The AIFER project is led by the security research centre Bayerisches Rotes Kreuz (BRK) and German Aerospace Centre (DLR).

The aerial survey was carried out over the areas particularly affected by recent floods with the support of drone tracking and airspace management services provided by Droniq. The drone was an unmanned fixed-wing aircraft with a wingspan of 3.6 meters, equipped with an integrated HOD4track, among other things.

This project supports the situation during sea rescue operations using unmanned aerial systems (LARUS) and is intended to apply to future scenarios and operations in rescue services and disaster control. To improve the visualization of the aerial situation, Droniq provided on-site support with a mobile ground station antenna and several DroneTags, thus ensuring the visualization of the flying objects. In this way, the drone flight could be observed via TrackViewer from the control centre.