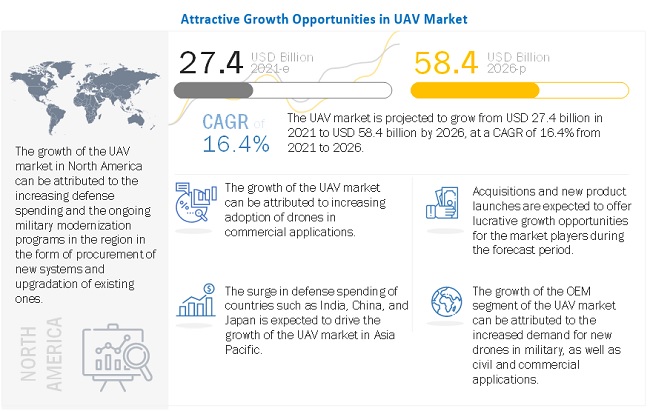 According to the report: The UAV market is facing steady growth owing to the increased use of drones in the consumer and commercial sectors, along with their popularity in the defence sector. Even though about 70% of the UAV market is expected to be connected to military endeavours, the commercial business represents the speediest growth prospect.

Based on application, the UAV market has been classified into the military, commercial, government & law enforcement, and consumer. For this segment of UAV market, the military segment of the UAV market is projected to grow from USD12,760 million in 2021 to USD19,641 million by 2026, at a CAGR of 9.0% from 2021 to 2026. The commercial segment of the market is projected to grow at the highest CAGR of 28.0% during the forecast period; the growth of this segment can be attributed to the developments and advancements in drone technology.

Drones have been employed by military forces of different countries for over a decade. Predator UAV is the most popular one. Compact drones are currently being used by ground forces on a routine basis. Military expenditure for UAV technology is anticipated to grow as a total percentage of military budgets, offering growth opportunities to specialized drone manufacturers and software developers. A primary analysis of the budget request of the Department of Defense for 2022 resulted in the identification of USD 1.9 billion for drone-related procurements, and research and development projects. China is a major market for UAVs in the Asia Pacific region. Its strong economy and increased military spending make it the second-largest defence spender in the world. With the emergence of China as the second-largest defence spender in the world, its neighbouring countries such as India, Vietnam, the Philippines, and Japan are also making efforts to enhance their defence capabilities and increase military spending Approximately 95 countries across the world already have some form of military drones. Various drones are being designed solely for surveillance operations. However, some drones have been designed for critical operations, such as carrying munitions. Countries such as China, India, Germany, and Azerbaijan use remotely piloted UAV designed for carrying munitions for dense forces. Drones are also used as loitering munitions. The loitering munitions are defined as weapons or flying bombs that contain high-resolution cameras and infrared systems for conducting surveillance activities. They hover over the targets, search for the location of targets, and attack them when targets are visible. Drones are also used to gather data about ongoing and life-threatening military missions with the help of their intelligence, surveillance, and reconnaissance (ISR) capabilities on a real-time basis. Some common examples of military drones or UAV are MQ-4 Reaper, MQ-1B Predator, QF-4 Aerial target, RQ-4 Global Hawk, AeroVironment Wasp AE, RQ-1 Predator, BQM-155 Hunter, CL-289 Piver, etc.

Aerial remote sensing is used to ensure the protection of critical infrastructures such as military bases, government buildings, airports, and banks, as well as to ensure homeland security. UAV offer prompt, efficient, low-cost, and reliable services to the police departments of different countries as they need to be ready to respond to any incident promptly and require quick and relevant information. The use of UAV is a cost-effective option as it not only saves man-hours but also ensures public safety and carries out investigations. For instance, in February 2019, SWAT in Campbell, California (US) used a US-1 quadcopter drone to obtain a real-time feed of a hostage situation in Denny’s restaurant. The drone provided real-time feed to the SWAT team, allowing them to neutralize the situation. The use of UAV for remote sensing is research-intensive. Drones being used in geomatics are called UAV-g. Usage of drones in geomatics is a well-recognized scientific process devoted to the study of the use of UAV in the geomatics and remote sensing sector. The 2019 edition of this event was held by the University of Twente (Netherlands) and involved about 300 participants from 36 different countries.

Consumer acceptance plays an important role in the adoption of UAV in non-military applications. The use of drones for commercial applications by retailers globally is still in the nascent stage, while in some countries, such as Pakistan, they are still to witness acceptance. Moreover, concerns among consumers about the efficient delivery of parcels by drones, the chances of their theft, and the probability of damages to them due to weather conditions also act as challenges for the adoption of drones. Service providers and manufacturers of UAV witness potential risks of losing parcels owing to the absence of insurance coverage for parcels. Commercial airline and general aviation accidents are hard to foresee even after using the most advanced modelling tools, though insurers at least come up with good premium calculations to cover up for losses each year. However, in case of commercial UAV, there is little data for making similar predictions. Most models of UAV are new, and thus, insurers have a limited understanding of the features that could impact the prospect of an accident or system failure. This makes it necessary for the service providers and manufacturers of UAV to work closely with regulatory authorities to ensure that UAV are used responsibly. Though tiny drones (up to 20 kilograms) are about 40 decibels quieter than conventional civil aircraft, they still generate a high-pitched noise, which is very annoying to normal people. 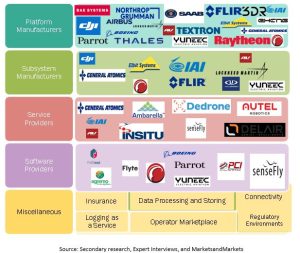