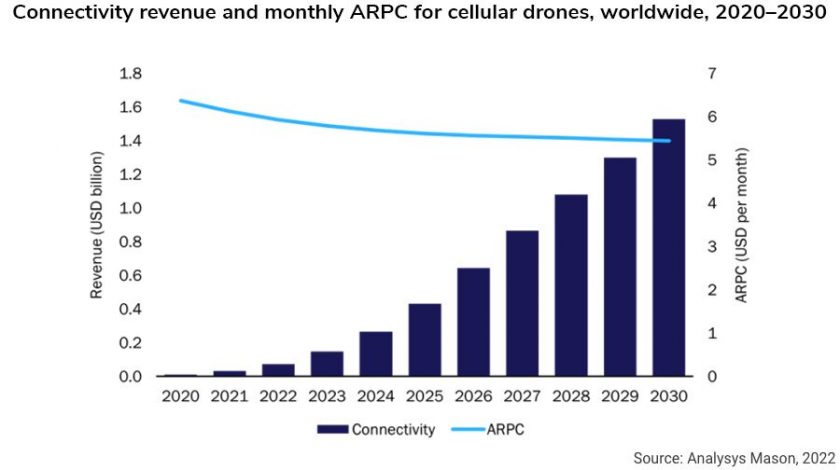 According to the company press release, cellular network is most commonly the native connectivity method deployed with most cell phones, smartphones, and dial-up devices. It’s a mobile-based network used with a radio antenna.

Cellular connectivity presents major opportunities to the use of drones – if those deploying them can adapt on how their drones are operated. Beyond just connectivity, cellular connected drones allow the creation of network-based products and services – something of ever-increasing interest.

Early examples of what can be accomplished are still rare, as the technology is nascent. In late 2021, however, one case study saw Skyward and Verizon partner with French drone company Parrot to announce Parrot ANAFI Ai — the first off-the-shelf drone with Verizon network connectivity.

The model includes not only a 4G LTE connection, but many other powerful features including advanced encryption for data storage and transmission, a 48-megapixel camera capable of taking 4K ultra high definition video, and omnidirectional obstacle-avoidance technology to intelligently dodge hazards in all directions.

In the future – should legal changes allow for it – this could allow users to command drones in distant locations. In this case, cellular connected drones could revolutionise the transport and supply chain industry, shifting huge quantities of goods over all kinds of terrain quickly and safely.

It is this kind of potential that has led consultancy Analysis Mason to forecast that the total value chain revenue generated by cellular connected drones worldwide will be more than USD8 billion in 2030. According to the researchers, USD1.5 billion of this will come from connectivity.

Connectivity revenue generated by cellular drones worldwide sat at USD11.1 million in 2020, but as cellular drones produce far more data traffic than typical IoT connections, they will therefore generate a considerably higher average revenue per connection (ARPC). Analysys Mason predicts that operators will generate most drone-related connectivity revenue from selling various services. These include basic drone tracking; routing services to ensure flight path adherence; and real-time transfer of the data generated by the drone payload (such as HD, 4K and/or thermal cameras and sensors).

Ibraheem Kasujee, an analyst with Analysys Mason and author of the report, commented, “The most significant revenue opportunities related to cellular drones will only be available to operators that provide services to the aviation sector. However, drones still represent an interesting opportunity for other operators. They can use the drone market to develop and showcase their 5G and edge computing capabilities, or to develop new capabilities that they may have little experience with in the IoT realm (such as professional services). Drones are also highly marketable and operators may use them to improve their brand and achieve their ambition of becoming known as data service and platform providers.”