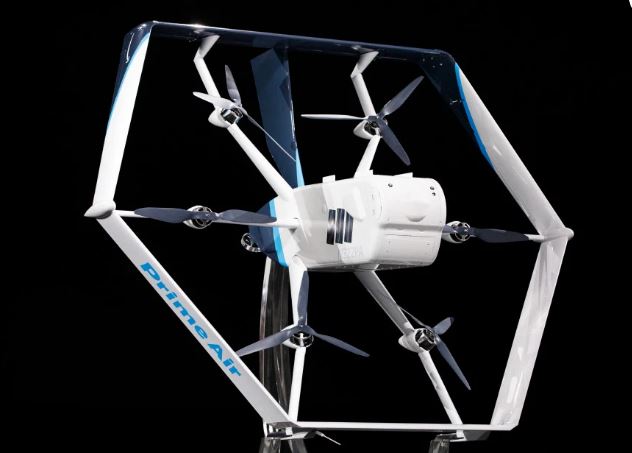 It may be a little late into the game but Amazon’s new delivery drone – unveiled on June 5 at the re-Mars event in Las Vegas – has been designed to leapfrog all and any competitors by delivering autonomous operations from day one.

Although the company has not yet said when and where the first deliveries will take place, Yahoo Finance reports that the Federal Aviation Administration has authorized Amazon to start operations with the drone in the USA.

“You’re going to see it delivering packages to customers in a matter of months.” CEO Jeff Wilke told the audience at the event.

What makes the Amazon delivery drone different from anything else is not its shape – a hexagonal, helicopter/fixed wing aircraft design with very few moving parts – nor its performance – able to transport a 5lb load up to 15 miles in 30 minutes – but the sensors and machine learning electronics which will allow for autonomous operations.

The new delivery drone features a range of visual, thermal and ultrasonic sensors linked to an autonomous flight control system which navigates the safest route to the landing spot and automatically avoids obstacles along the path – even when not connected to a communications network.

According to Tech Crunch magazine, the flight control system allows the drone six degrees of freedom to manoeuvre to its destination.

“To see what’s happening around it, the new drone uses a number of sensors and machine learning models — all running independently — that constantly monitor the drone’s flight envelope (which, thanks to its unique shape and controls, is far more flexible than that of a regular drone) and environment,” says the publication. “These include regular camera images and infrared cameras to get a view of its surroundings. There are multiple sensors on all sides of the aircraft so that it can spot things that are far away, like an oncoming aircraft, as well as objects that are close, when the drone is landing, for example,” says the journal

“The team also uses a technique known as Visual Simultaneous Localization and Mapping (VSLAM), which helps the drone build a map of its current environment, even when it doesn’t have any other previous information about a location or any GPS information.”