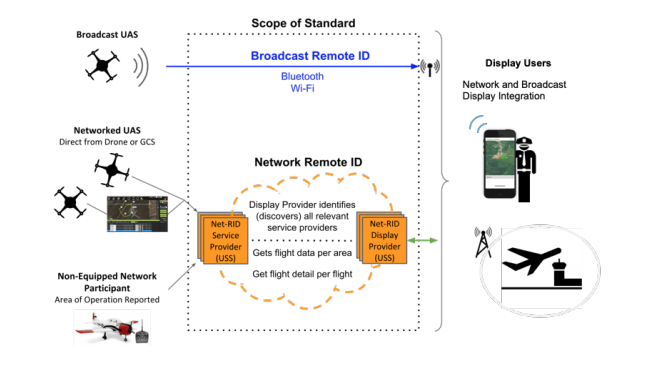 The Drone Advisory Committee (DAC), in its meeting with Federal Aviation Administration on 17 October, has developed a series of recommendations for voluntary equipage of remote identification technologies by UAS manufacturers or operators and what types of incentives, if any, could be provided by the FAA for operators who voluntarily use UAS equipped with Remote ID.

The following text is an excerpt from the minutes of the meeting.

The entire Task 1 group unanimously agreed to recommend the ASTM Remote ID (RID) standard to the DAC as the equipage basis for the voluntary program. The RID standard has a scope that includes various means to perform Remote ID. The standard is intended to be a world-wide adaptable standard. Therefore, it is expected that a regulator would add a regulatory “overlay” and Minimal Operational Performance Standard (MOPS) on top of the ASTM standard as part of regulatory implementation. As with other ASTM references by the FAA, this overlay may specify requirements for certain fields and may override other standard requirements. To participate in the voluntary Remote ID Program, the UAS must perform Remote ID according to the ASTM Standard using any one of the following methods outlined in the standard:

The method used must function in the area of operation. Participants must support all required fields in the ASTM standard. Optional fields may be used at participant’s discretion.

In the absence of Remote ID of UAS and in consideration of security partners’ concerns regarding operations over people and other waivered operations under Part 107 in the intervening period, the FAA tasked the DAC to develop recommendations on: What types of incentives, if any, could be provided by the FAA for operators who voluntarily use UAS equipped with Remote ID?

The Incentives Subgroup came up with the following recommendations:

The DAC was developed to serve as a broad-based, long-term advisory entity that provides the FAA with advice on key Unmanned Aircraft Systems (UAS) integration issues by helping to identify challenges and prioritize improvements. The committee helps to create broad support for an overall integration strategy and vision. Membership is comprised of CEO/COO-level executives from a cross-section of stakeholders representing the wide variety of UAS interests, including industry, research and academia, local government and first responders, retail, and technology.