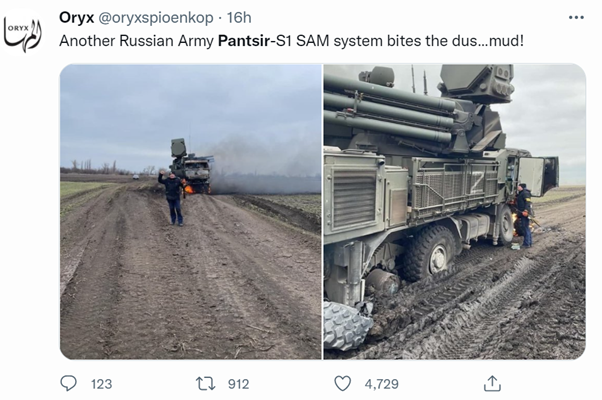 Never, in the history of human combat, had an army been so prepared for drone warfare as the Russian army which invaded Ukraine on February 24. For the last 18 months Russia has been upgrading its systems and adding new layers of platforms, sensors and network capabilities to its battlefield drone defence systems.

But defence analysts the world over have been baffled by the number of occasions during which Ukraine’s Turkish-built Bayraktar TB2 and smaller domestic UA-Dynamics “Punisher” drones have apparently been able to evade the most sophisticated counter-UAS air defence system outside Israel.

“Russia has an advanced, layered air defense system with networked radar and other sensors, and an array of weapons from portable surface-to-air missiles and mobile artillery up to the much-feared S-400, claimed to be able to shoot down stealth fighters,” according to David Hambling, writing in Forbes on February 28 ….”the Bayraktar TB2, like most drones, is reliant on a radio link between drone and operator. Russia, which prides itself on its radioelectronic warfare capabilities and has some of the best jamming systems in the world, should be able to prevent Ukrainian drones from functioning. It seemed then, that Russia was ready for Ukraine’s drone force and would deal with it easily.”

For the last year or so the defence trade press and Russia’s own news outlets have been reporting in some depth about the many projects underway to refine the Russian army’s C-UAS capability.

Shortly before the invasion, in December 2021, Russia’s TASS new agency reported the Pantsyr-S1M counter UAS/air defence system had received new hypersonic surface-to-air missiles that boosted its striking range from 20 km to 30 km, its operational altitude from 15 km to 18 km and its destruction area threefold. Read the article here. According to the news agency: “The upgrade has substantially boosted the Pantsyr’s capabilities for fighting all types of drones. In particular, the system is capable of effectively detecting and destroying all types of strike drones that are in operational service,” he said.

In September 2021, TASS also reported that the Tor-M2 battlefield counter-UAS system, comprising a surveillance system now optimised for stealthy targets and 16 vertically launched surface-to-air missiles with a striking range of up to 12 km, was about to get a major upgrade.

In May 2021 Samuel Bendett, an analyst with US defence think-tank CNA, writing in Defence News reported on how Russia’s experiences of countering drone attacks in Syria and elsewhere had provided the bedrock for the country’s counter-UAS strategies.

“The Russian experience defending its Khmeimim base from UAV strikes has become the foundation of its military’s c-UAS training program(me),” wrote Bendett. “Starting in 2019, all major military exercises and drills include the defense against an adversary’s massed drone attacks. The electronic warfare (EW) systems and technologies emerged as a key concept in this training. Across the Russian military services, in numerous drills, exercises and manoeuvres, EW training is regularly conducted against adversarial drones, and practically all C-UAS drills feature EW systems as a key element.”

This strategy is based on a three-layered approach – where static long-range systems for UAV detection and mitigation are integrated with more mobile medium and short range units.

“The long-range detection station can be placed in the border zone or in the direction of probable attacks, according to a recent Izvestia report on Russia’s developing C-UAS battlefield capabilities “Additional radars for anti-aircraft gunners will be especially useful in mountainous areas, where it is difficult to detect low-flying targets …Such stations will collect intelligence information at distant approaches. They are able to determine the number of aircraft, the height and direction of flight, the formation of battle formations. If necessary, the radars can work together with anti-aircraft missile systems, air defense, aviation, border and coastal control forces and air traffic control, which is responsible for the safety of flights of both military and civil aircraft.”

“Every brigade—each with up to four 900-person battalion tactical groups—travels with an air-defense battalion,” according to Forbes writer David Axe, with infantry groups equipped with Igla or Verba infrared-guided man-portable air defence systems (MANPADs). “Two-thirds of the MANPADs ride with the front-line companies, usually keeping at least a few hundred yards from the forward edge of battle,” says the Forbes article. “One third stays back with the brigade command post…To cover the ground troops while bullets are flying, a Russian brigade also travels with six Tunguska tracked vehicles. A Tunguska packs two cannons and launchers for eight infrared-guided missiles that can range six miles out and two miles up. Six Strela-10 vehicles—tracked light armored vehicles firing the same kinds of short-range missiles as the dismounted teams—complement the Tunguskas…”

“In Syria, the MoD confirms that a combination of hand-held and stationary systems are used to suppress and jam drones that continue to harass and attack Russian positions,” wrote Bendett. “In Russia, military forces started using Stilet and Stupor portable C-UAS rifles, along with the newest Krasukha-C4 EW complex designed to identify adversarial strike aircraft and to suppress their communications and navigation.”

On the battlefield itself Borisoglebsk and Zhitel EW systems are also used to conduct EW intelligence gathering, analysis and then radio interference , with other systems such as the R-934BMV automated jamming station, the Silok-01 electronic warfare system and the Pole-21 advanced radio suppression system also available for this role. Read our previous article.

The Bayraktar TB2 has proved itself to be a robust and capable opponent, especially in the hands of operators who know how to exploit their multi role capabilities. But the lessons of the Nagorno Karabakh war have been well understood for some time, especially in Russia, whose air defence systems in service with Armenia – deployed to defend against crewed aircraft – were continuously overwhelmed by small, agile TB2s, often operating in swarms.

With so much hardware on display and practice time to deploy it in an optimised fashion it is astonishing that any drone hostile to the Russians survives more than a few minutes near the battlefield. While Russian C-UAS units have had several successes they have also been manifestly unable to eliminate the Ukrainian UAV threat, which would have been one of their key objectives. While it is likely that the majority of the 20 plus Ukrainian Bayraktar TB2 drones will have been shot down in the first week of combat that has bought enough time for Ukraine to have sourced more of the type from Turkey to continue their success against Russian targets.

These are some possible reasons for the Russian’s failures.

First, there may be two key weaknesses in the Russian army’s high-level C-UAS strategy – it is based around the defence of a static position and relies, in the first instance, on a host nation willing to deploy strategic surveillance assets as a first line of defence. Neither of these are in play in Ukraine.

Second, there are two definite weaknesses in Russian tactics. Russian units have not deployed their forces in the battalion tactical groups with layered air defences and anti-drone capacity, according to Samuel Bendett writing in Defence News, with forward elements advancing without their air defence assets. Russian vehicles have also been moving along highways without being dispersed or camouflaged – making themselves relatively easy to identify and attack.

It is not only the C-UAS resources which have been misfiring – Russia’s electronic warfare units have also been operating well under par and this has undoubtedly contributed to the Russian army’s inability to detect and jam Ukrainian UAS signals.

And once again, Russia has underestimated the capability of the TB2, which can be operated from mobile bases and protected from Russian jamming with new EW capabilities. At this stage it is impossible to know what EW support, if any, is being given to Ukrainian forces.  But it also seems as though Ukraine has been very adroit in using the TB2 against targets which are less well defended than the masses of front-line, well-protected armoured units.

Finally, it looks as though Ukraine has been able to field a more powerful EW capability than many forecast and its growing strength in anti-tank systems has seen large number of mobile air defence systems taken out of the battle early on, disrupting the integrated layered defence strategy.

As the fighting continues the balance of power is likely to shift again. But for the moment, and against all expectations, Ukraine is still operating effective UAS missions against the one of the world’s most sophisticated C-UAS capable armies.