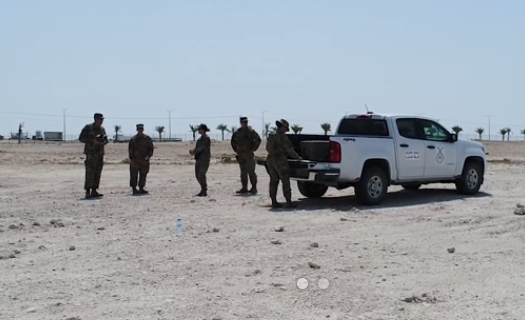 The US Central Command has increased training for US forces against drone attacks in response to the threat of Unmanned Aerial System (UAS) attacks in the Middle East, says a press release. US Air Force and US Army assets have been bolstering their c-SUAS efforts, which has helped develop seminars to provide leadership with guidance on how to counter drone threats.

Airmen at Ali Al Salem Air Base, Kuwait, have continued this ongoing effort to protect and defend the installation from UAS threats. “We take care of the airspace for our area,” said Staff Sgt. Daniel Butts, 386th Expeditionary Security Forces Squadron non-commissioned officer in charge of counter-small unmanned aerial systems. “So we’re here to detect, track, identify and then, if need be, defeat.”

The seminars are a one-on-one opportunity for general leadership to understand what our capabilities are, said Butts. “These systems provide real time video or a picture and now leadership has a better understanding of what others could use it for.”

US Marine Corps Gen. Kenneth F McKenzie Jr, US Central Command commander told a US Senate Committee earlier this year that UAS is “the most concerning tactical development in the CENTCOM area of operations since the rise of the improvised explosive device.”

Attacks occurring in 2021 against coalition forces in Iraq and Syria have prompted others in the area of responsibility to ramp up their c-SUAS and c-UAS programs.

This unconventional base defense has driven the mindset for security forces that are protecting against UAS attacks.

“We call it the kill chain….detect, track, identify and defeat,” explained Butts. “The main thing is detecting so we’re able to see it and track it. Once we’re able to track it, we’re going to identify it, which is key to helping us understand if it’s hostile or not and to what extent. Then we can defeat it.”