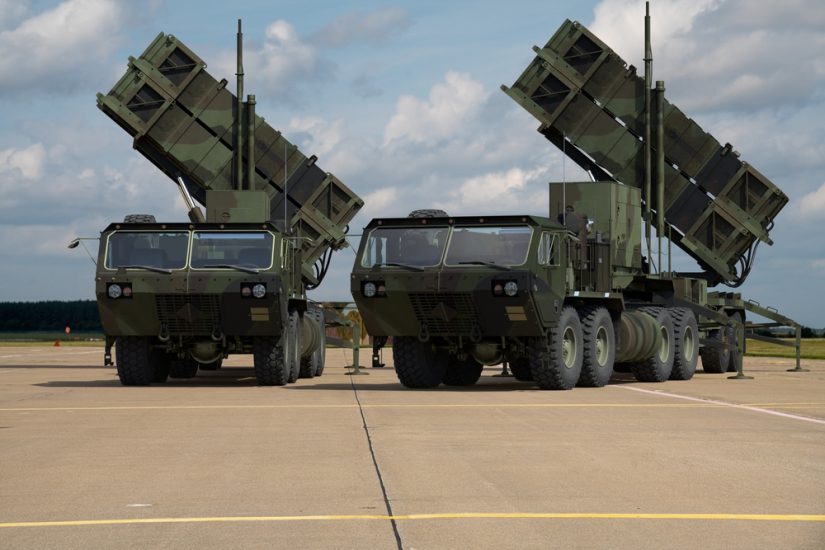 “As DOD continues to develop, procure, and deploy these systems, congressional oversight of their use may increase, and Congress may have to make decisions about future authorizations, appropriations, and other legislative actions.

The following text provides a verbatim summary of agency research and procurement efforts:

The Air Force is testing high-powered microwaves and lasers—both forms of directed energy—for C-UAS missions. For example, in October 2019, the Air Force received delivery of a vehicle-mounted C-UAS prototype— the High-Energy Laser Weapon System (HELWS)—that will undergo a year-long overseas field test. HELWS is intended to identify and neutralize hostile or unauthorized UAS in seconds and, when connected to a generator, to provide “a nearly infinite number of shots.” As stated in its 2016 Small UAS Flight Plan, the Air Force may additionally pursue airborne C-UAS options, although the status of such efforts is unclear.

In 2014, the Navy fielded the first—and, to date, only— operational directed-energy weapon, the Laser Weapon System (LaWS), aboard the USS Ponce (LPD-15). LaWS is a 30-kilowatt laser prototype capable of performing a CUAS mission. The Navy also plans to deploy ODIN, an optical dazzler that interferes with UAS sensors, and HELIOS, a 60-kilowatt laser, aboard the USS Preble (DDG-88) in 2021. Both systems are intended to protect U.S. assets from UAS attacks. In addition, in a March 28, 2019, memorandum, the Department of the Navy announced that it would be partnering with the Defense Digital Service to “rapidly develop new [cyber-enabled] CUAS products to address the evolving UAS threats.”

The Marine Corps funds a number of C-UAS systems through its Ground Based Air Defense (GBAD) program office. For example, in 2019, the Corps completed overseas tests of the Marine Air Defense Integrated System (MADIS), which employs jamming and guns. The system can be mounted on MRZR all-terrain vehicles, Joint Light Tactical Vehicles, and other platforms. In July 2019, Marines aboard the USS Boxer (LHD-4) used MADIS to neutralize an Iranian UAS that was deemed to be within “threatening range” of the ship. As part of GBAD, the Marine Corps is also procuring the Compact Laser Weapons System (CLaWS), the first DOD-approved ground-based laser. This system—which reportedly comes in variants of 2-, 5-, and 10-kilowatts—is also in use by the Army. Although the Marine Corps has experimented with man-portable C-UAS technologies, now-Commandant of the Marine Corps David Berger testified to Congress in Department of Defense Counter-Unmanned Aircraft Systems that they “have not panned out” due to weight and power requirements.

In July 2016, the Army published a C-UAS strategy to guide the development of its C-UAS capabilities (to date the only service to do so publicly). This was followed in April 2017 by Army Techniques Publication 3-01.81, Counter-Unmanned Aircraft System Techniques, which outlined “planning considerations for defending against low, slow, small [LSS] unmanned air threats during operations,” as well as “how to plan for, and incorporate, CUAS soldier tasks into unit training events.” C-UAS is also part of the U.S. Army Combat Capabilities Development Command’s six-layer air and missile defense concept, composed of (1) Ballistic, Low-Altitude Drone Engagement (BLADE), (2) Multi-Mission High-Energy Laser (MMHEL), (3) Next-Generation Fires Radar, (4) Maneuver Air Defense Technology (MADT), (5) High-Energy Laser Tactical Vehicle Demonstrator (HEL-TVD), and (6) LowCost Extended Range Air Defense (LOWER AD). Although these systems are still in development, the Army has fielded some man-portable, vehicle-mounted, and airborne C-UAS systems. In addition, like the Navy, it has partnered with the Defense Digital Service to develop computer-enabled C-UAS products.

DOD is researching and developing a number of C-UAS technologies. For example, the Joint Staff and other DOD agencies have participated in C-UAS efforts such as Black Dart, an exercise intended to “[assess and validate] existing and emerging air and missile defense capabilities and concepts specific to the C-UAS mission set” and “[advocate] for soldiers’ desired C-UAS capabilities.” In addition, the Defense Advanced Research Projects Agency (DARPA) funds technology development programs for CUAS such as CounterSwarmAI, which is to “develop systems for anticipating and defeating autonomous systems of the future,” and the Multi-Azimuth Defense Fast Intercept Round Engagement System for ship-based point defense.

In December 2019, DOD streamlined the Department’s various counter-small UAS (C-sUAS) programs, naming the Army as the executive agent tasked with overseeing all DOD C-sUAS development efforts. On January 6, 2020, the Secretary of Defense approved the implementation plan of the new office, known as the Joint C-sUAS Office (JCO). Working in consultation with the combatant commands and the Office of the Under Secretary of Defense for Acquisition and Sustainment, JCO assessed over 40 fielded C-sUAS systems.

To date, it has selected 10 C-sUAS defensive systems and one standardized command and control system for further development. JCO has produced a Joint Capability Development Document outlining operational requirements for future systems and, in January 2021, released a DOD C-sUAS strategy. JCO is to additionally produce a DOD Directive on C-sUAS and a threat assessment of C-sUAS capabilities.

DOD also plans to establish a Joint C-sUAS academy at Fort Sill, Oklahoma by FY2024. The academy is to synchronize training on counter-drone tactics across the military services.

Finally, Section 1074 of the FY2021 National Defense Authorization Act (P.L. 116-283) requires a series of reports to Congress, including a report on and independent assessment of the JCO’s C-sUAS activities and a report on the threat posed by UAS. Potential Questions for Congress