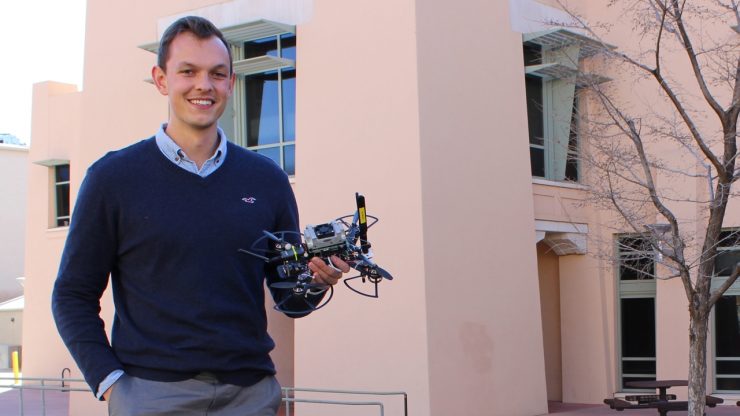 A group from the University of New Mexico (UNM) is working with Sandia National Laboratories robotics experts on efficient ways to intercept enemy unmanned aircraft systems mid-flight, according to the UNM newsroom.

Rafael Fierro, a professor in the Department of Electrical and Computer Engineering at UNM, is leading the UNM part of the project. He directs the Multi-Agency, Robotics and Heterogeneous Systems (MARHES) Laboratory at UNM which has experience in real-time control of unmanned aerial systems, including working with Sandia on the precursor to this project.

The Sandia group previously successfully tested their concept indoors with a swarm of four unmanned aircraft systems that flew in unison, each carrying one corner of a net. Acting as a team, they intercepted the flying target, trapped it in air like an insect caught in a web and safely lowered it to the ground.

This test has been part of a two-year Laboratory directed research and development project called Aerial Suppression of Airborne Platforms (ASAP). That demonstration led to funding for three years of continued research and testing for the Mobile Adaptive/Reactive Counter Unmanned System (MARCUS) project, which will address current and future national security threats posed by small unmanned aircraft systems.

Fierro and a group of three UNM graduate students are working on four main tasks for MARCUS:

1) Developing a test bed for small unmanned aerial systems (sUAS) detection. This involves the creation of software needed to control and navigate multiple UAS devices on a test bed. They will also use machine learning algorithms for sensor fusion and sUAS identification.

3) Applying neutralization techniques to minimize collateral damage according to the environmental conditions. In this task, the team will investigate and evaluate different neutralization approaches through modeling and simulation activities.

“The overall goals of what we are working on with MARCUS are detection and identification; tracking and assessment; and neutralization of the threat of unmanned aerial vehicles,” Fierro said. “The UNM team will be providing its expertise in UAV swarm coordination and vision-based navigation to address the challenge presented in the MARCUS project.”

The MARCUS project is funded by the NATO Science for Peace and Security Programme, and incorporates advanced algorithms funded by the Department of Homeland Security Science and Technology Directorate. The work is being performed in partnership with armasuisse Science and Technology of the Swiss Federal Department of Defence, Civil Protection and Sport.