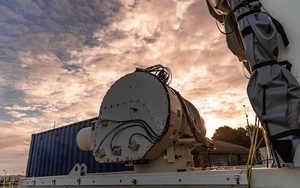 According to a UK government press release:

“The trials involve firing the UK DragonFire demonstrator at a number of targets over a number of ranges, demanding pinpoint accuracy from the beam director. These tests improve the UK’s understanding of how high-energy lasers and their associated technologies can operate over distance and defeat representative targets. The ability to deliver high levels of laser power with sufficient accuracy are two of the major areas that need to be demonstrated in order to provide confidence in the performance and viability of LDEW systems.

“The programme has developed a UK sovereign ‘centre of excellence’ staffed with experts from multiple fields. Laser directed energy weapons have the potential to provide lower cost lethality, reduced logistical burden and increased effectiveness when compared to other weapon systems – the technology could have a huge effect on the future of defence operations.

“The programme’s specialist industry partners are:

Testing of the DragonFire system took place on Dstl’s Porton Down Range, which has defined distances over which the trial serials were conducted to a maximum distance of 3.4km from DragonFire.