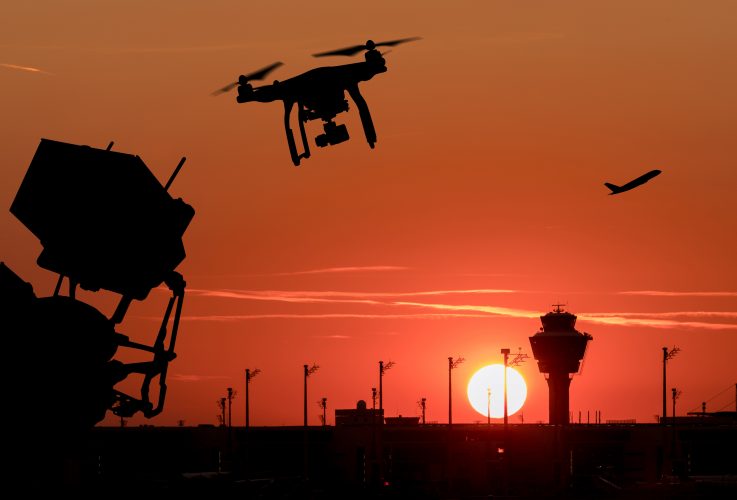 “In a short period, we’ve made a lot of progress,” said Max Fenkell, chair of the RTCA Special Committee SC-238 established in December 2019 to develop minimum operational performance standards around Counter-Unmanned Aircraft Systems (C-UAS). Less than a year later, RTCA is ready to publish its first deliverable.

The joint committee is producing harmonised documents that are technically identical covering three areas of operation. The first of these – due release this year – is an Operational Services and Environment Definition (OSED) for C-UAS in controlled airspace. This is aimed at airports and air navigation service providers (ANSPs) and provides an operational description of where C-UAS systems operate in controlled airspace. The draft OSED moved to final review and comment phase in September 2020.

US standards development was prompted by the Preventing Emerging Threats Act of 2018 which expanded the authority of government agencies to mitigate threats caused by unmanned vehicles. Subsequently the Department of Justice issued guidance on how to protect facilities from drones in April 2020; and departments including the Federal Aviation Administration (FAA), Homeland Security (DHS) and Federal Communications Commission (FCC) issued an advisory on C-UAS in August 2020.

In a webinar hosted by RTCA on 16 September 2020, members of the joint committee identified the key issues behind C-UAS rule making.

US drone manufacturer Skydio believes the first and most important priority is to promote responsible use of drones by operators, backed by the company’s ethical policy framework to inform users about the safe use of the technology. Head of Regulatory and Policy Affairs Bendan Groves said: “C-UAS measures should supplement but not supplant other measures to mitigate risk. C-UAS is a tool in the tool kit. Educating operators is absolutely fundamental to airspace security.”

Skydio also supports remote identification of autonomous systems, due to be subject to a new rule in the US from the end of 2020. “There is a lot of focus on mitigation technology, but this is misplaced.” Said Brendan Groves. “Appropriate authorities need the authority to deal with malicious actor, granted – we spent 2 years getting that authority in Congress – but you can’t stop what you can’t see. It all comes down to detection. So the most important thing in the field is to find the malicious drone, then you can determine how to deal with it.” He added remote identification is 80-90% of the solution and enables authorities to work with local law enforcement agencies.

This was demonstrated when a rogue drone was detected during the 2019 Super Bowl – attended by 70,000 spectators – moments ahead of a fly past by the Thunderbirds. The operator was contacted in under two minutes, removing the threat, while simultaneously talking with air traffic control and the Thunderbirds.

Representing the Air Force Research Laboratory (AFRL), C-sUAS Technical Integration Lead Philip Zaleski said testing the technology is challenging and involves multiple solutions. “We work across all the modalities in the C-UAS kill-chain to detect quicker, track better, and provide the C-UAS operator with the best system so they can take actions quickly. Detection is a challenge when we are dealing with small vehicles that look like birds operating below 50ft and moving at 70 mph.”

Philip Zaleski said the biggest challenge is staying ahead of the technology. “We continue to leverage our defense industrial base and we are making strides but there is always a danger that the threat moves on.” AFRL is working with partners in NATO to acquire and test different technology. “We share the science and technology to accelerate development and reduce cost. This is moving slower than we’d like.”

Trying to collaborate and align objectives is important in identifying ways to mitigate the global threat, and standardisation is expected to go a long way towards easing this process. This approach is especially relevant to command and control technology given that spectrum jamming is illegal in the commercial sector.

Progress at international level started with the Global Counter Terrorism Forum (GCTF) established in the aftermath of the 9/11 attacks on the Twin Towers in the US. Some 40 states endorsed the Berlin Memorandum on Good Practices for Countering Terrorist Use of Unmanned Aerial Systems in mid-2019 which documents good practise for C-UAS measures. It supports a strategic, rather than combative, approach to drone security and encourages governments to work with the drone industry to develop solutions.

Similarly, the US defense department is working with the federal sector to develop strategic solutions that operate seamlessly with Air Traffic Management (ATM) and Unmanned Traffic Management (UTM). Philip Zaleski said: “We share our library system and knowledge base, and we support exercises and events. We have demonstrated communication exchange between ATC, UTM and air operations to prove we can cue a C-UAS system and have shown this capability. UTM is still a moving target, led by FAA and NASA, which makes it a challenge. We are working in parallel to prepare for when UTM goes live.”

European states are also engaged in collaborative exercises, for example in Spain where Indra completed a week of demonstrations in September working with the Ministry of Interior, Ministry of Defence, ANSPs, and airports. “We need to understand compatibility of systems, their effectiveness, and how the different entities interact,” said Jorge El Malek.

Looking ahead to the next phase of policy development, Brendan Groves said there are three concepts that need to be in place to ensure airspace safety and security. The three A’s include: