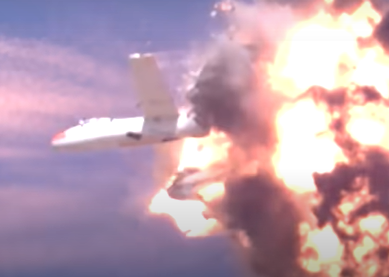 Raytheon has released footage of its counter drone Coyote Block 2+ with KRFS radar destroying a number of drones during a demonstration at the US Army Yuma Proving Ground in Arizona using both fixed and mobile LIDS in counter Unmanned Aerial System (UAS) operations in November 2021.

According to a report in The Drive, the demonstrations took place in cooperation with the US Army’s Integrated Fires and Rapid Capabilities Office (IF/RCO) during a 10-day summer test period. Raytheon stated the Coyotes’ palletized launcher system seen in the footage featured a KuRFS precision targeting radar, while the launcher seen aboard an Army M-ATV-based M-LIDS launcher used a Ku-720 mobile sensing radar system. These fire control systems cue the drones to intercept their targets.

The palletized version seen in the footage would be able to be transported and deployed in forward operating areas or even aboard large ground vehicles or surface vessels, enabling a wide variety of platforms to have their own short-range air defenses.

The footage led industry observers to comment on the vulnerability of unmanned military weapons to high-end counter drone devices.

The Coyote is a small, tube-launched UAV with a flexible launch system capable of being installed on a wide variety of platforms including unmanned surface vehicles. Earlier versions of the Coyotes were propeller-powered and resembled fixed-wing aircraft with pop-out wings and twin tails. These types were intended primarily for intelligence, surveillance, and reconnaissance roles.

The Block 2 and Block 3 Coyotes have a much more missile-like configuration and feature four manoeuvrable control surfaces in their tail sections. A rocket motor gives these newer Coyotes their initial thrust, after which a small jet turbine takes over. This particular propulsion and control scheme is said to give the Coyote 2s and 3s a dogfight-type of capability according to Raytheon, making it capable of engaging highly manoeuvrable targets.

According to The Drive, the Army was planning to send its own M-LIDS featuring the Raytheon Coyote to an unnamed forward location in the US Central Command area of responsibility. This is interesting given that separate video footage appeared online earlier this week that shows two ‘suicide drones’ being shot down as they approach Ain Al Asad Air Base in Iraq, which hosts US forces. A Centurion Counter-Rocket, Artillery, and Mortar (C-RAM) system, which is armed with a 20mm Vulcan cannon, brings down one of the explosive-laden unmanned aircraft. An unknown physical interceptor explodes near the other drone.