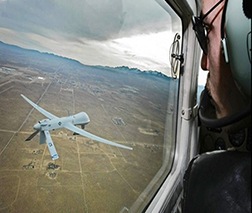 Raytheon is close to completing the safety case for the company’s Ground Based Detect And Avoid (GBDAA) system, used by the US Air Force and also demonstrated at Springfield-Beckley Municipal Airport in Ohio. The ground-based detect and avoid (GBDAA) capability uses existing air traffic data from multiple sources to provide Unmanned Aerial System (UAS) operators with a real-time display of aircraft in the surrounding airspace. GBDAA alerts operators to potential conflicts with neighbouring aircraft and recommends avoidance manoeuvres for UAS in the event that a conflict does occur.

The US Air Force uses GBDAA in place of ground observers or chase aircraft at Cannon Air Force Base in New Mexico to allow safe passage of UAS to a military operations area via civil airspace since 2014. Raytheon is currently installing the equipment at Beal Air Force base in California to eliminate a temporary flight restriction area, followed by Grand Forks base in North Dakota. A mobile version of the equipment was recently deployed in Ohio to help accelerate the safe integration of drones into the national airspace: Here, GBDAA supports small UAS operating beyond visual line of site (BVLOS) in an area that extends some 200 square miles.

The Volpe Centre is supporting deployment of the mobile version of GBDAA for the joint project between US Air Force Research Labs and the State of Ohio. The programme is building a safety case for the Federal Aviation Administration (FAA), and providing a mobile common centre able to respond in the case of a natural disaster.

The main component of GBDAA is a modified FAA terminal automation system equipped with Raytheon’s Standard Terminal Automation Replacement System (STARS) that ingests and displays surrounding aircraft to a UAS operator. GBDAA leverages existing NAS radar equipment and infrastructure to locate surrounding aircraft, and can also take feeds from infill radar designed to track small UAS. Conflicts are brought to the attention of the controller using three levels of alert with visual and audio alarms. The mobile unit features also a data link capability that enables position data based on GPS information to be sent by UAS operators to the command unit.

With thousands of UAS predicted to be flying in the next decade, Raytheon believes GBDAA can help support their safe integration into national airspace and enable both manned and unmanned aircraft to follow the most direct and safe routes. Replacing the need to fly in segregated airspace could also help to reduce the size of restricted military areas.

(Image: Detect and avoid trials under way at the US Department of Transportation Volpe Center)