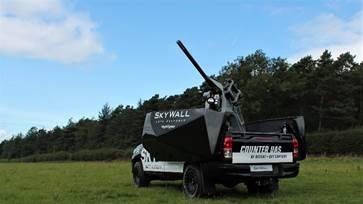 Counter-UAV companies OpenWorks Engineering and SteelRock Technologies have come together to launch an integrated vehicle mounted counter-drone system, combining radio-frequency (RF) disruption with a physical net to provide a layered defence against unmanned aerial vehicles. Similar to a typical commercial vehicle, the drone defeat system is hidden under rapidly deployable covers to remain discreet when not in use. When a drone threat has been detected, the vehicle can be manoeuvred to defeat the target drone using either SteelRock’s NightFighter RF-based effector technology or the SkyWall net capture system. OpenWorks launched the handheld capture system SkyWall100 in 2016 and has since delivered systems to law enforcement and military customers around the world. The NightFighter C-UAV system from SteelRock was introduced at DSEI 2017, and is currently deployed in military, law enforcement and civil protection roles in multiple jurisdictions.

The Counter-Drone Response Vehicle will be on display at DSEI 2019, 10-13 September at ExCeL London.