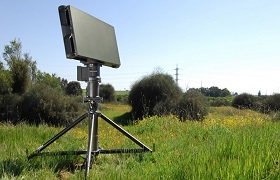 ELTA Systems, a division and subsidiary of Israel Aerospace Industries (IAI), has unveiled a new and enhanced configuration of its Drone Guard system which detects, identifies and disrupts the operation of UAS and small drones. The new modular configuration has added a Communication Intelligence (COMINT) system for more precise detection, classification and identification based on broadcast frequency and unique communication protocol analysis and verification for neutralizing threats, says the company. Furthermore, the Drone Guard’s 3D Radars, Electro-Optical (EO), and Jammer systems have all been upgraded with bolstered capabilities.

The enhanced COMINT system “can effectively jam or disrupt the drone’s control channel and navigation, by supporting an array of communication protocols that can ‘fend off’ a single drone or even a swarm of drones from the guarded premises,” says ELTA.

Yoav Tourgeman, IAI VP and CEO of ELTA, said: “ELTA designed the Drone Guard to be modular, so that customers can choose the best combination that meets their operational and budgetary requirements in the most cost-effective manner