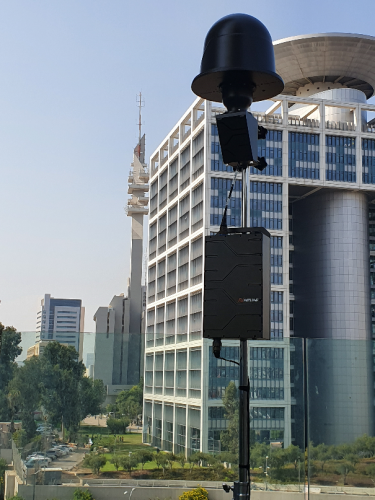 Netline Communications Technologies Ltd. – a developer and manufacturer of high-end electronic warfare and spectrum dominance systems for defense forces and homeland security agencies – is to launch a new DF component for its DroneNet system – at Milipol Paris 2019 and Defense & Security 2019.

According to the company: “DroneNet is a comprehensive detecting, identifying, direction finding, locating and jamming solution, designed to prevent unauthorized drones entering secured airspace, such as over strategic facilities, temporary military bases or public appearances of high-profile officials. The new, MIL STD-compliant DF component adds an additional layer to the multi-layer DroneNet solution. Whilst the deployment of a single DF sensor points the location of a detected drone (both its direction and its elevation), the deployment of multiple DF sensors enables the determination of a precise 3D location.

“Upon detection of an unauthorized drone, the DroneNet can jam the communication between the drone and its operator on ISM bands, as well as the drone’s GPS signal. By disabling the drone’s control and telemetry channels, the DroneNet operator eliminates the immediate threat. The DroneNet’s modular design enables future upgrade and insertion of additional capabilities, frequencies and threats to the Data Base.”

At its booth, Netline is also displaying a miniature jamming payload, carried on a racer drone, capable of reaching speeds of up to 300 mph. This provides a precise solution for pin-point jamming of suspicious drones intruding on secured airspace, giving customers the ability to deal with threats surgically, without having to use the entire DroneNet jamming segment.