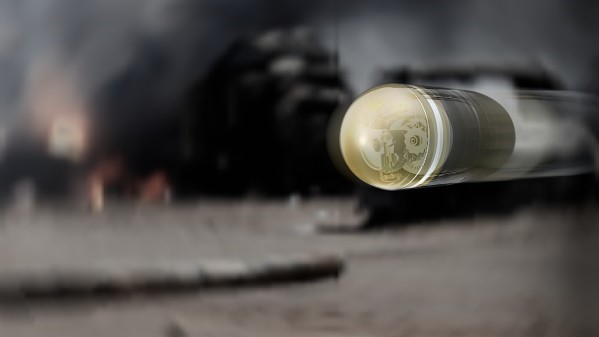 This new technology makes it possible for any larger gun to fire shells that can be programmed to explode with pinpoint accuracy, either before, above or inside a target, says the company. Adaptable to several weapon platforms, including 40 mm grenade launchers, 30 mm guns, 120 mm tank ammunition and M-72 rockets, this makes the technology ideal for dealing with a number of different threats, including drones. “With the first versions already combat proven and in production, the technology offers three distinct benefits – low collateral damage, flexibility and ease of installation – together delivering a significant and reliable advantage to its users.”

One of the challenges faced by modern warfighters is the danger of collateral damage when operating near civilian infrastructure. This makes it difficult to fire regular ammunition at small aerial targets such as drones, because if they miss, the bullet or shell will just continue and eventually hit something else, potentially causing significant unintended damage. This threat is virtually eliminated with Nammo’s programmable ammunition, as it will explode where intended, independent of whether it has hit its target or not. In the case of smaller ammunition types, such as 40 mm grenades, these are designed to maximize their effect within a specific range from the point of detonation, with more limited effects beyond that. This means that as long as they are set to detonate sufficiently high above the ground, the fragments created by the detonation will fall harmlessly to the ground.

Additionally, given the accuracy of the ammunition, it has a good chance of either detonating or disabling any explosives or weapons that the drone may be carrying when they hit, further reducing the danger to infrastructure or personnel below.

Another constant challenge for warfighters is the question of space and weight, which limits the amount of weapons and supplies that personnel and vehicles can carry. The benefit of Nammo’s programmable ammunition is that rather than being a dedicated anti-drone system, that has to be carried in addition to other weapons, it is instead an upgrade to an existing weapon system, allowing it to be effective against a wide range of threats.

In fact, the technology was originally not developed with drones in mind. It’s primary purpose is as a ‘counter defilade’ system, able to defeat enemy forces hiding in trenches or behind cover by exploding just above, or beside them. Alternatively, in the case of larger calibers, it can be set to penetrate a certain distance inside a target, such as a dirt wall, before detonating. The ability to take down drones is therefore mainly a demonstration of the flexibility of the technology, rather than a key design requirement.

Anti-drone operations are extremely complex, and place high demands on rules of engagement, sensors, and targeting procedures. Nammo’s ammunition does not alone resolve this issue, but it offers ground forces something they so far have been lacking, which is a cost effective weapon that could be used even in urban areas.