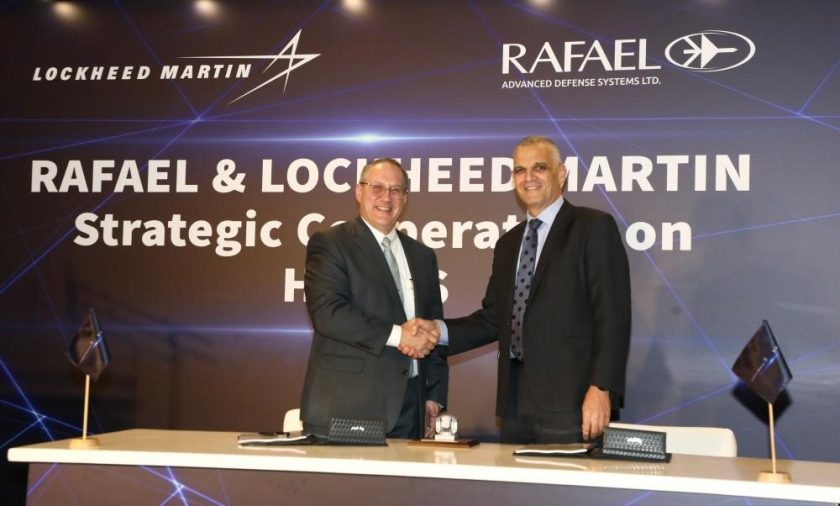 Lockheed Martin and Rafael Advanced Defense Systems, Ltd have signed a teaming agreement that includes jointly developing, testing and manufacturing High Energy Laser Weapon Systems (HELWS) in the U.S. and Israel. The future joint-development will be based on the assets that have been developed independently by RAFAEL and the Ministry of Defense’s Directorate of Defense Research and Development (DDR&D) within the framework of the IRON BEAM project, said a joint press release. The cooperation will be geared towards developing a variant of the system for the American market as well as others.

According to the release:

“After years of joint development by the Ministry of Defense’s Directorate of Defense Research and Development (DDR&D) and RAFAEL, the IRON BEAM project was initiated by the DDR&D. In the last year, a series of tests on the system was carried out that proved the operational capability of the system. IRON BEAM is a 100kW-class HELWS, expected to be the first-ever operational system for ground-based air defense against threats such as rockets, mortars and UAV’s, delivering engagement at the speed of light.

“This strategic teaming agreement serves as a force multiplier for RAFAEL and the Israeli market. We are working to ensure our customers receive the most advanced, effective, and best in class systems. This agreement will expand and diversify the capabilities we can offer to a variety of customers,” said RAFAEL CEO and President Maj. Gen. (Ret.) Yoav Har-Even. “Over the last three decades, alongside the DDR&D and the Israeli Ministry of Defense, RAFAEL has invested in laser research and development, resulting in IRON BEAM and we expect to become the first operational laser defense system of its kind. This serves as a clear example of Israeli-made capabilities leading to strategic cooperation which will greatly benefit both sides.”