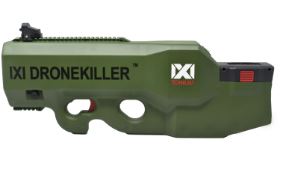 According to IXI: “Current counter-UAS system technology includes radio frequency (RF) command and control (C2) disruption systems…and directed energy weapons. These systems protect forward operating bases, airports, and other strategic high-asset facilities. These systems are large and stationary; they cannot be used by a mobile user. In addition, UAS threats are more prevalent at the front lines, at small checkpoints and outposts, and remote areas where convoys, dismounted warfighters, and security personnel on missions away from well-established air control assets….The Drone Killer adds counter-UAS capabilities to mobile forces that cannot use large systems that add weight and require added power sources. The Drone Killer is compact and light-weight, able to be deployed from inside light vehicles or by dismounted warfighters in mobile units, strike teams, checkpoints.”

Defense News reports that the technology behind the C-UAS system does not use conventional broadband jamming techniques by a software defined radio technology which inserts noise or additional data to break the link between the drone and operator. According to the news service: “Each drone has a different type of frequency, for example the DJI Phantom…operates on the 2400 to 2483 MHZ frequency, or 2.4 GHZ band. Within that 2.4 band, an operator selects different channels to link between them and the drone itself.”