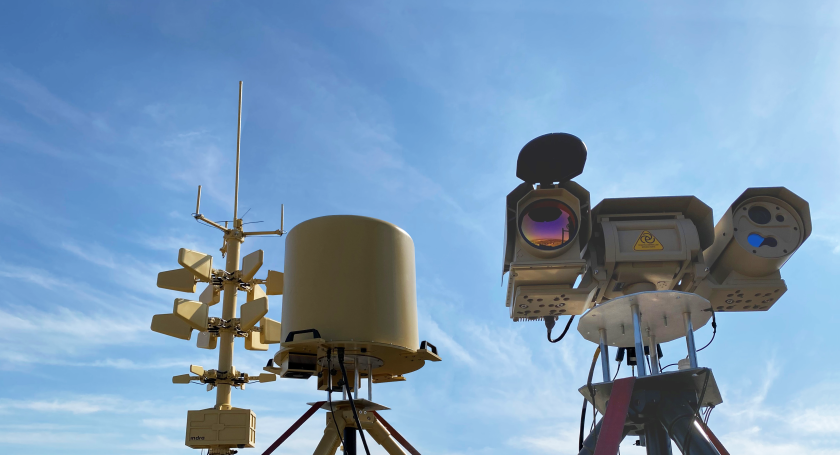 Spanish technology company Indra supplied it ARMS counter drone solution as part of security measured deployed at the recent NATO summit in Madrid at the end of June 2022.  The ARMS system was integrated into a powerful defence deployment that included the use of anti-aircraft artillery and F18 and Eurofighter aircraft, says a company press release.

Spain’s Air and Space Force Deployment Support Squadron (EADA) was tasked with protecting arriving heads of state and government on their arrival at Torrejón de Ardoz air base, where 30 delegations and 100 other aircraft landed, with the aid of Indra’s ARMS system. The system protected aircraft as they approached the runways, and was also responsible for shielding the entire perimeter of the airbase, which covers 45 hectares, an area equivalent to about 90 soccer fields.

The deployment carried out by Indra at the Torrejón Air Base included Spanish technology provided by Indra and ART and the support of CERBAIR’s sensors.

The ARMS system is designed to respond in a highly automated and rapid manner, launching a targeted response to take down a single target or neutralize massive attacks if necessary.

The solution gathers intelligence to identify the type of drone that is in the air and chooses the most effective response in each case. The operator supervises the entire operation from the command and control station and launches the necessary countermeasure to block the device’s navigation and control systems, bringing it down or forcing it to land.

Miguel Acitores, Indra’s security business director, underlined that the Spanish Air Force “has confirmed the high operational performance of the system during its latest international missions”.

One of them was the European mission in Mali, where Indra’s system protected the Koulikoro base and contributed to reinforcing the security of the Spanish detachment.

Indra has been a pioneer in the development of these systems and it has delivered its solution to the armies of different countries, which are currently operating with it. The benefits include its ability to adapt to all kinds of settings and offer protection in conflict zones, civilian areas and airports, where the countermeasures to be used must be much more accurate and almost surgical to minimize any interference with the electronic systems of the aircraft and control tower.