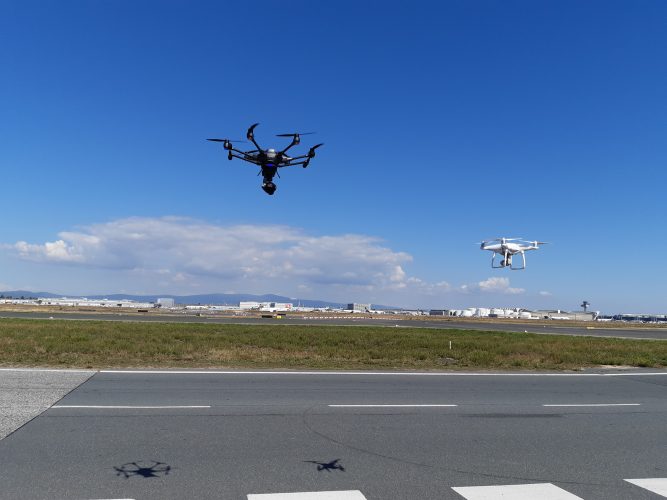 German air navigation service provider DFS together with project partners Fraport AG and Flughafen München GmbH have concluded a large-scale test of drone detection system at the two busiest airports in Germany. The partners spent four months testing six different drone detection systems (DDS) at Frankfurt and Munich airports. Last year, DFS was commissioned by the German Federal Ministry of Transport and Digital Infrastructure (BMVI) to establish systematic drone detection at the 16 designated international German airports and this test project was carried under this mandate. The aim is to detect drones at a distance of 10 nautical miles (18 kilometres) along the approach and departure routes of aircraft to airports.

The detection systems tested had to demonstrate their performance both day and night as well as during a range of manoeuvres with abrupt changes of direction, ascents directly upwards which saw the drones rocket to heights of up to 1,000 feet (about 300 metres) above ground as well as high-speed flights along the runways. Sometimes the drones flew autonomously along predefined flight paths. In other cases, they were controlled manually by professional drone pilots.

According to a DFS press release, a significant result of the test project was that there is no universal solution that can be implemented uniformly at all airports. The solution will be a mix of different sensor technologies, each technology’s individual strengths offsetting the weaknesses of the others. The detailed results of the tests are currently being compiled. The results will be made available to the German Ministry of Transport by the end of this year, together with information on the identification of suitable detection solutions for the 16 designated international airports in Germany. In 2021, DFS will launch a selection procedure for a suitable technology.

For the test project, technical experts at DFS developed special test and evaluation methods for the detection and tracking of drones with reproducible test scenarios, system-supported flight programming and standardised detection analyses.  The performance of the systems is assessed by means of a series of statistical computations. “There has never been a more detailed investigation of drone detection systems to date,” said Angela Kies. “Although there have been delays during the one-year period due to the COVID-19 pandemic, we managed to conduct all tests thanks to our well-thought-out hygiene concept.”

Due to their small size, drones are virtually invisible to conventional radar systems. To safely integrate unmanned aircraft systems (UAS, or drones) into airspace, both authorised drones and so-called uncooperative drones have to be detected. Uncooperative drones are not visible or identifiable to air traffic control and pose a threat to air traffic at and around airports. A functioning drone detection system is the basis for DFS to maintain safety in air traffic and for the police authorities to be able to initiate effective defensive measures.

Little is known at present about the performance of the detection technologies available on the market. The detection systems already in use at various airports have mostly evolved from military applications and have proven to be ineffective and not very reliable. This reflects the enormous demands placed on the performance of these systems in the airport environment: “Various runway layouts, topographies, building structures and the vegetation in the vicinity make every airport unique,” said Angela Kies, Head of the Unmanned Aircraft Systems Department at DFS and DDS project manager.

In addition, detection systems must be able to distinguish drones from other moving objects at airports, such as vehicles, birds or helicopters. The systems must be able to distinguish between a wide range of drones, which are available on the market in all shapes and sizes. This explains why drones of various types were used during the test flights: from agile mini drones to larger multi-rotor systems with higher payload capacity all the way up to fixed-wing drones that can reach speeds of more than 140 kilometres per hour.

Interference from drones is becoming more of a problem

Since 2015, DFS has logged well over 500 cases of interference to air traffic caused by drones at German airports, and the number is increasing. In the spring of this year, Frankfurt, Germany’s busiest airport, was out of service for four and a half hours following two incidents with drones. The upshot is flight cancellations, delays and enormous economic damage. Most importantly, however, drones travelling close to manned air traffic endanger the lives of passengers and aircraft crews. By law, unauthorised drone flights in the vicinity of airports are considered as dangerous interference in air traffic and are punishable with imprisonment for up to ten years in Germany.