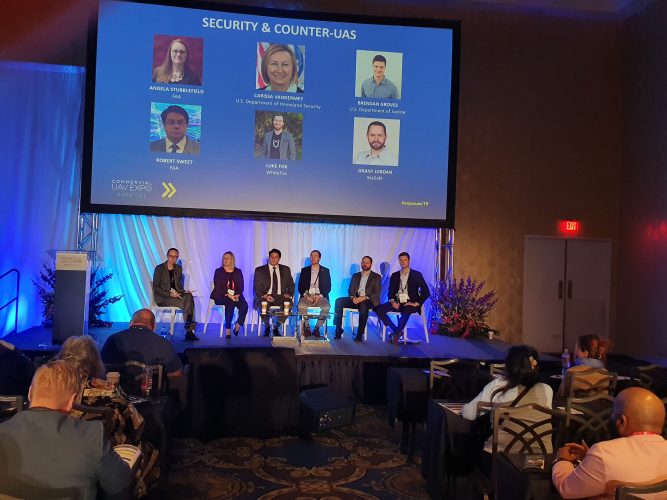 The Federal Aviation Administration (FAA) is developing counter-UAS system equipment standards for detection, management and interdiction of rogue drones and plans to develop a draft roadmap by the end of November, followed by a request for industry comments, according to Robert Sweet, manager of the Strategic Operations Security group within the FAA’s Air Traffic Organization, speaking at the 2019 Commercial UAV Expo in Las Vegas.

As part of the 2018 FAA Reauthorization act the ‘‘Preventing Emerging Threats Act of 2018’’ the agency has been given responsibility to work with the Department of Homeland Security (DHS) and the Department of Justice (DoJ) to develop systems and procedures.to counter drones that pose a “credible threat” to “covered facilities or assets” without impacting the safety or the efficiency of the national airspace system (NAS).

For the last few months the FAA has been working to develop a programme which uses a risk-based approach to deciding how best to protect different assets. According to Sweet there are a number of major areas of concern which will need to be addressed – such as the issue of the limitations of current technology, which is mainly based on RF-detection and jamming systems which cannot safely be used in areas where safety-critical communications could be compromised. Then there is the scale of the problem, especially with the increasing propagation of legitimate drone operations in sensitive airspace areas.

It is part of a wider roadmap which includes testing C-UAS technologies at five airports – one of which has to be a hub facility – and the FAA William J. Hughes Technical Center in Atlantic City. The FAA is working with the DHS and the DOJ to set up a joint test and evaluation programme, developing a common set of test standards so the agencies can accept each other’s test data and exchange lessons learnt from their individual experiences. This will mean the FAA will be able to tap into DHS experience from fielding C-UAS equipment in a number of roles – with the Coast Guard, at land borders, protecting the UN General Assembly and operational experience with the Secret Service, according to Carissa VanderMey, Senior Advisor for Science and Technology Directorate (S&T) at the DHS.

At the same event Brendan Groves,  Senior Counsel to the Deputy Attorney General of the U.S. Department of Justice, said for the DOJ wanted to target the operator as much as the drone. The department has set up its own C-UAS test and evaluation unit, to identify which technologies were best placed to defend the country’s 122 federal prisons.