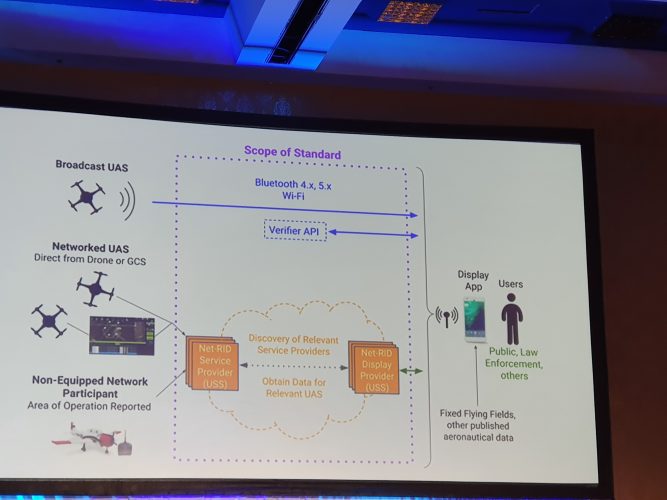 When the Federal Aviation Administration (FAA) publishes its notice of proposed rule-making (NPRM) on remote identification of drones for public comment this December it could open the door to a new era of more advanced commercial drone operations – not just in the USA but globally.

Attendees at the Commercial UAV Expo in Las Vegas (October 30-31) heard how the FAA’s publication plans are being carefully choreographed with the publication of UAS traffic management (UTM) standards from ASTM International, the US-based standards organisation developing industry protocols for Bluetooth and Wifi remote ID broadcast services for operators using electronic devices, along with the sharing of networked remote ID data among government, industry and the public (see main image).

If these standards are adopted globally, as speakers suggested was almost inevitable, then the door is open for regulatory frameworks to be adopted worldwide for advanced operations such as services over people and beyond line of sight, supported by federated and competitive UTM service suppliers.

According to Philip Kernul Chair of ASTM’s F38 UAS Committee: “We’ve been socialising this process across the Atlantic and with Canada. Right now we are just about finished with the standard. In Europe ASD has been delegated to do remote ID standards – specifically for the open category but not the specific or certified categories and we are in discussions with them about using our standard as an organ of reference so they can just adopt our standard as a whole. “

Draft standard documents have also been sent to Australia, New Zealand and Singapore.

“It will become the world’s standard for remote ID,” said Executive Director, FAA Office of Unmanned Aircraft Systems Integration Jay Merkle.”There is no activity in the world that is even close to what it being produced.”

The publication of the new standards and the proposed rule-making has been a long time coming The UAS Identification and Tracking Aviation Rulemaking Committee (ARC) submitted its report and recommendations to the agency back in September 2017 on technologies available to identify and track drones in flight and other associated issues.

In the process of developing the new architecture the FAA has had to develop its proposed rule-making without knowing what the final industry standards will be while ASTM has had to develop new standards without knowing what the new rule making will look like. Over the last two years the FAA and its partners have had to face a mushrooming set of issues, beyond the core technology issues.

Some of the key questions that have had to be answered are:

What are the most appropriate technologies to be used? How should drone identification information be shared among the government agencies, the public and industry? How should the service be developed as a public private partnership? How should more complex drone flight risks be evaluated in a systematic, standardised way? Will recreational drone users and modellers have to comply with the new regulations?

While all the answers will not be clear until publication of the NPRM some of the high level components of the new architecture were outlined at the conference.

The NPRM will describe how remote ID information will be collected, managed and distributed in various levels to different stakeholders. The electronic registration number of nearby drones (within 400m) should be visible to the public on a smart phone via Bluetooth 4 and WIFI communications. Law enforcement agencies will have more information about the drone’s ownership at longer ranges, via more powerful handheld devices.

In December 2018, the FAA issued a Request for Information (RFI) to establish an industry cohort to explore potential technological solutions for Remote ID. The companies have been working with the FAA, following the blueprint of the LAANC programme, to develop the core technologies. “We’ve been working with them to iron out the kinks and then invite everyone in,” said Jay Merkle. “We have to have the ability to get something out of the door; if you wait until you can please everyone then nothing will ever get done.”

The FAA has also been working to develop common risk assessments between ATM and UTM areas of operation. “The Air Traffic Organization is putting together a safety panel to look at what are the safety management criteria that everyone should use when they evaluate the safety cases,” said Jay Merkle. “We now have a safety risk management order in the FAA on how to uniformly manage in a standard manner safety cases for drones.” This is based on the JARUS SORA output – which will mean, in the theory, if US commercial operators have met the safety criteria for advanced operations in the USA this operation can be exported to other parts of the world.