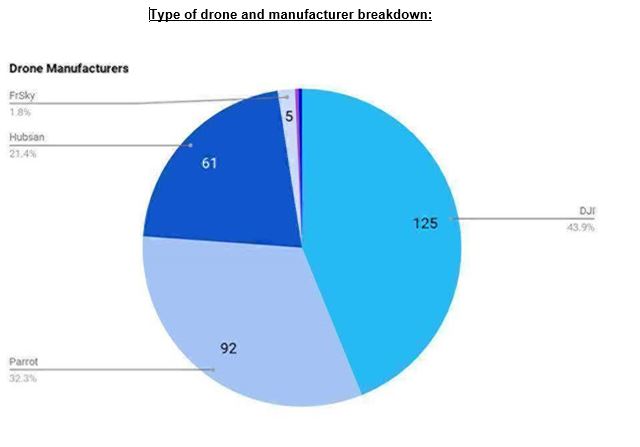 Counter UAS (C-UAS) systems manufacturer Dedrone has compiled a report Dedrone UK Airport Counter-Drone Study 2018 following the installation of its equipment at four undisclosed airports across the United Kingdom. Drone activity was monitored at four locations for a total of 148 days, and 285 drones were detected. The report outlines the type of technology used, a breakdown of the data collected and the main findings.

According to the conclusions of the report:

“This data provides unrefuted evidence of the presence of drones at airports. Airport operators must consider how to approach drone safety measures and determine the additional risks that drones pose to their overall security program. Airports are multi-faceted security centers. They have officers monitoring the airfield, tarmac and fences, people on the ground following cargo and passenger baggage, and managers of warehouses that contain fleet maintenance programs. Thousands of safety and security elements exist on a single day in the life of an airport, and each component has a different security risk. Aviation regulators and airports are acutely aware of the dangers drones pose to their airspace. However, there is a gap of knowledge and understanding of the intention of drones within physical grounds of airports. All drones near airports are a threat, regardless of the pilot’s intention. Airport managers must be proactive in protecting their operations from incursions.

“International aviation regulators have been slow to provide guidance to airports as to the types of counter-drone technology they are allowed to incorporate into their operations. This lag to adopt drone detection technology at airports will only become increasingly more dangerous as more incidents occur. As seen with the Gatwick Airport shut down, drones are going to cause damage and disrupt operations, leaving passengers frustrated and airlines blocked out of safe and clear airspace to fly.