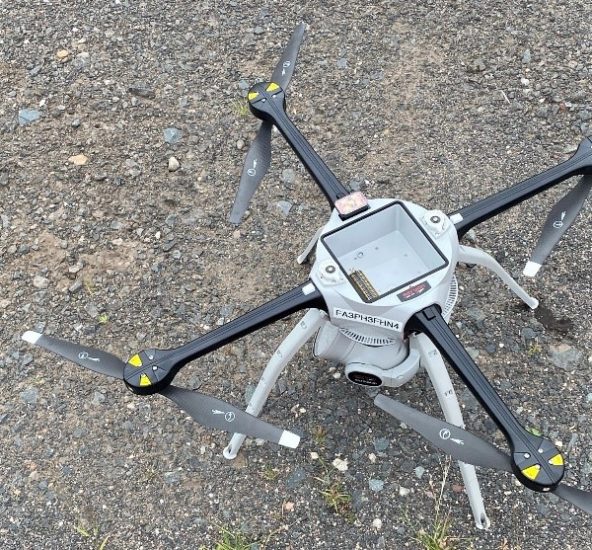 The Unmanned Aviation Systems (UAS) team designed the exercise to assess the Air Guard’s 103rd Security Forces Squadron’s ability to respond to a drone incursion on their base at Bradley International Airport (BDL).

In this practical exercise, a police-operated drone was flown to an area within the base perimeter of the airport. With the exception of senior base personnel and the FAA, no one was aware that this was an actual test of the security forces to respond to such an incident, which included notifying external agencies and coordinating a response. A TSA video team was on hand covertly recording the incident. The UAS team will use the video for evaluation and training.

In response to the planned incident, a security patrol quickly located the state police trooper, who was piloting the drone from a covert location.

“This was a totally new exercise concept and tested our joint-response capabilities,” stated Lt. Colonel William Deme, 103rd Security Forces Squadron Commander. “This was a great first exercise and we learned a lot. This bolsters our readiness.”

In addition to testing the Air Guard’s response, the CSP also used the exercise to ensure they had a high degree of preparedness to respond to a UAS incident. Major Shawn Corey, Commanding officer of the Emergency Services Unit, responded in person to the incursion report and had a police mobile drone detection platform transported up to the police barracks at BDL. “If there was a persistent threat to an airport in Connecticut from a drone, these are just some of the measures we would take to mitigate the threat,” he stated.

The Connecticut State Police has several future exercises scheduled throughout 2021, and TSA will continue to play a role in supporting a partner agency as they hone their drone mitigation strategies and techniques.

“In Connecticut, TSA, CSP and the Air Guard are the primary members of a UAS rapid response team,” said Steve Blindbury, TSA’s Connecticut Assistant Federal Security Director for Law Enforcement. “The only way to ensure you are truly ready to respond to an UAS incursion to commercial air space is to participate in frequent exercises.”