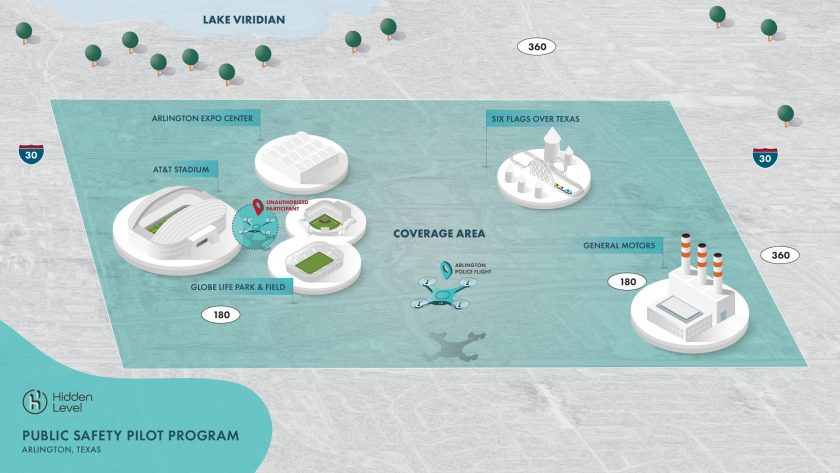 The launch of the pilot project was timed to coincide with 27 September football game between the Dallas Cowboys and the Philadelphia Eagles. In addition to AT&T Stadium, Arlington’s Entertainment District features several large public venues that include Globe Life Park, Six Flags Over Texas, the National Medal of Honor Museum and the Esports Stadium Arlington & Expo Center.

Drone sightings around active public venues continue to be a concern for law enforcement agencies across the country. Through the airspace monitoring system pilot project, when a drone is reported near a public venue or in restricted airspace, law enforcement can now compare Hidden Level’s real-time data against registered flight plans for both commercial and civilian drones, allowing them to corroborate information and better assess the intent of why drones might be in the area. In addition to the real-time data, law enforcement will also have enhanced capability to gather and analyze data over time, allowing them to assess various trends in the airspace during public events. Hidden Level’s technology does not capture the personal data or locational information of individuals.

In order to legally fly a drone within the entertainment district, a drone operator must have a current pilot’s license, the drone must be registered with the FAA, and a flight authorization request must be submitted to the FAA with details of where the drone will be flying, at what altitude, and for how long.  During large public events, such as NFL, NCAA or MLB games, Temporary Flight Restrictions (TFLs) are issued which call for no airspace activity starting one hour before the advertised start time of the special event and ending one hour after its conclusion.

In addition to Hidden Level’s AMS, Arlington has been forward looking with testing smart city technologies that include sensor-laden robots that scan the city’s sewer systems, smart traffic signals that analyze and monitor signal and safety information in real-time, digitizing government, business and customer information and transactions, infrastructure for driverless vehicles, 5G broadband, and other Internet of Things (IoT) technologies that increase efficiencies and connectivity.

Based in Syracuse, Hidden Level was recently selected by the New York State Police to monitor airspace over the 2021 New York State Fair which saw nearly 800,000 visitors over the 18-day event. They are also working with NASA’s Ames Research Center on drone-traffic management and advanced aerial mobility applications.