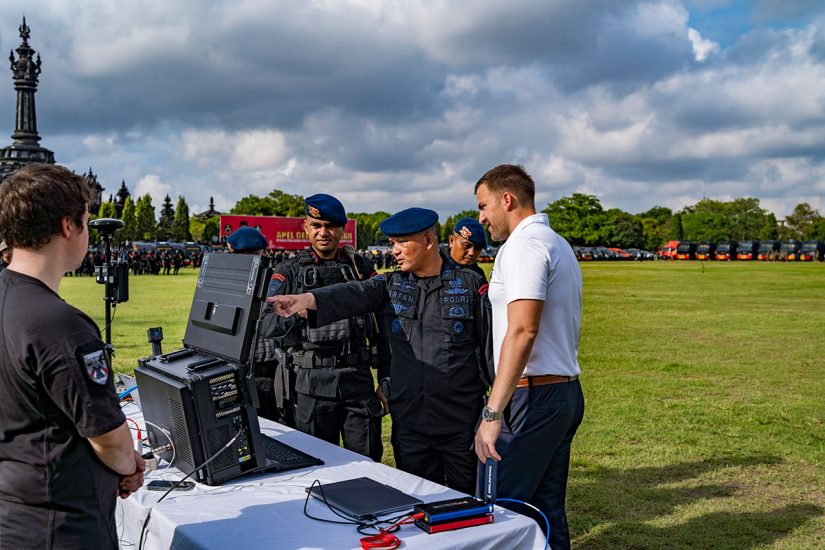 Aaronia reports successful protection of conference hotels against rogue drone threats at the 17th G20 Summit in Bali, Indonesia, 15-16 November 2022. The German counter drone company contributed to security infrastructure for 20 world leaders, 10 leaders from participating guest states, as well as members from the delegations of these 30 states.

AARONIA states that drone detection has taken on a more significant role in the G20 Summits’ security apparatus as drone technology continues to develop rapidly, prices of these drones decrease, and they are more accessible than ever before. In addition to these trends in drone development, the operation of commercially available drones requires almost no prior knowledge or experience, resulting in a device with a dangerous potential for espionage and terrorist attacks.

To minimize the threat of these drones, the Indonesian Mobile Brigade Corps (Brimob), a special unit of the National Police dedicated, among other things, to anti-terrorist measures and responsible for the security of the G20 Summit, relied on Aaronia’s AARTOS drone detection system together with its local Indonesian partner J-Forces. The AARTOS DDS was selected to ensure the security of some of the world’s most important leaders, says the Aaronia press release.

AARTOS not only determines the position, speed, and altitude of drones, but also determines the location of their operators in real-time. In addition to these features, the AAROTS system is able to scan the entire drone frequency spectrum, including parallel scans of different frequencies. Allowing for the location of any type of drone, not just commercially available ones on common frequencies. The easy integration process of the system was another reason why Brimob chose AARTOS DDS, as well as the fact that an expert team from AARONIA could be deployed on site to support Brimob with the installation and operation of the system at any time.

Immediately following the installation of the system, all drones used by Indonesian security authorities for surveillance and intelligence were first detected. The drones thus detected were stored in the system as “friendly” so that they could operate undisturbed without triggering an alarm.

“The security and speed of the AARTOS system’s drone detection convinced us, as did its excellent detection range. Another reason why we like AARTOS was the fact that an expert team from AARONIA could deploy onside in terms of operating the system at any time,” said Colonel Irfan, Mobile Brigade Corps.