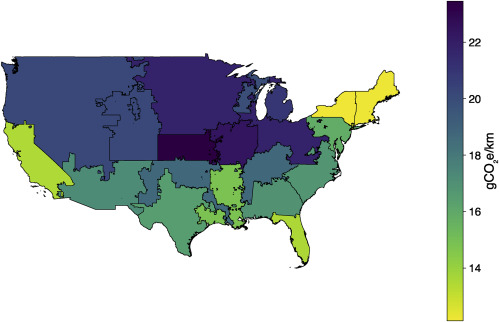 A new paper published in the research journal Cell compared the energy consumption of quadcopter drones against diesel and electric medium-duty trucks and small vans and electric cargo bicycles.

The findings show total energy consumption per distance of small quadcopter drones is among the lowest across transportation modes, as the vehicle is small, light, and has lower payload capacity.

The analysis shows the energy consumption per package of drone-equivalent deliveries, i.e., assuming that all packages delivered by the other modes are within the payload and space capacity of a small quadcopter drone. On an energy consumption per package basis, small quadcopter drones and electric cargo bicycles are among the most energy-efficient modes for small package delivery, says the report. The number of stops per kilometer and the number of packages delivered per stop varies according to the transportation mode and delivery density (highly dense areas are more likely to have more stops and packages delivered per kilometer).

Similarly, an analysis of the GHG emissions of the fuel of each transportation mode shows that quadcopter drones and electric cargo bicycles are among the most efficient vehicles in g of CO2e per km and a competitive alternative in terms of GHG emissions per package, according to the report. On the other hand, it notes that small drones are considerably limited in terms of weight and volume of the packages transported. Therefore, an analysis of the energy consumption and GHG emissions on a per metric ton-km basis shows that small drones are the most energy-intensive vehicles. Also, local airspace regulations, such as not flying over people and/or motor vehicles, could impose longer delivery routes, were not considered in this study, and could potentially increase the drone’s energy consumption and GHG emissions per package delivered.

Uncrewed aerial vehicles (UAVs) for last-mile deliveries will affect the energy productivity of delivery and require new methods to understand energy consumption and greenhouse gas (GHG) emissions. We combine empirical testing of 188 quadcopter flights across a range of speeds with a first-principles analysis to develop a usable energy model and a machine-learning algorithm to assess energy across takeoff, cruise, and landing. Our model shows that an electric quadcopter drone with a very small package (0.5 kg) would consume approximately 0.08 MJ/km and result in 70 g of CO2e per package in the United States. We compare drone delivery with other vehicles and show that energy per package delivered by drones (0.33 MJ/package) can be up to 94% lower than conventional transportation modes, with only electric cargo bicycles providing lower GHGs/package. Our open model and coefficients can assist stakeholders in understanding and improving the sustainability of small package delivery.

(Image: GHG emissions per km from a drone package delivery with a 0.5-kg payload and 2-km one-way delivery distance (4-km round trip), according to the sub-region’s non-baseload electricity grid carbon intensity)

The research paper is accessed here