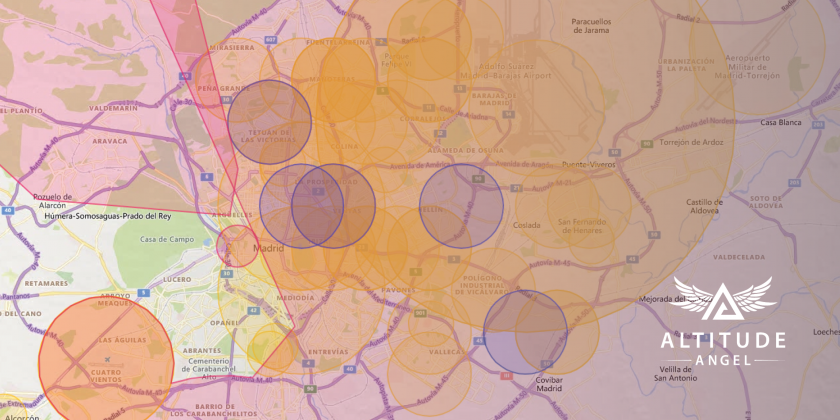 Since 2015, Altitude Angel has been a participant at the World ATM Congress. WAC, as it’s known to those attending, is the annual gathering of air navigation service providers (ANSPs), regulators, aircraft manufacturers, and a whole host of aviation related organisations and businesses from around the globe. In short, if your business involves ‘the sky,’ you’re there. I’m minded so many of our ANSP and regulatory friends were still unable to attend due to travel restrictions, which is why I felt it important to summarise my thoughts and the ‘big takeaways’ from our four days in Madrid.

I was privileged to share a stage with CANSO chair Cpt Gilbert Kibe, CANSO Director General Simon Hocquard, NATS CEO Martin Rolfe, Wing Head of Policy & General Aviation Margaret Nagle, and EASA Exec Director Patrick Ky, at the CANSO Executive Summit which is the opening event of the week in Madrid.  During our panel discussion I took the opportunity to ‘turn the tables’ and invite the audience to tell me how many of them understand what ‘UTM’ meant. Less than a handful of delegates out of 220 raised their hands.

Why so few? Well, over the past two years we have seen companies and organisations produce marketing material where UTM becomes ‘productised’: i.e., it becomes a ‘thing’. It seems everyone from start-ups to massive aviation & defence companies, and even a few ANSPs, have spent significant amounts of time and money talking about UTM, and getting it completely wrong.

Some want to sell an app, for others it is about account protection, others write software to manage the flight of a drone, or a fleet of one customer’s drones. This is not UTM.

Keeping records of who flew what drone for how many hours last week with which battery? Not UTM.

Planning a flight? Not UTM.

Showing where your drone/aircraft is on a map? Not UTM.

The vast majority of the product literature available today which says it’s ‘a UTM’ is describing something which is not UTM. This is why only a handful of people raised their hand to my question. The incorrect and incoherent rhetoric has created so much confusion for ANSPs, regulators, and the wider aviation industry.

Which is why I want to help the industry, and by industry, I mean ANSPs, regulators, incumbent suppliers, aircraft manufacturers and aviators, understand what UTM is and how it can help bring about positive change for airspace users across the world.

Let me start by saying UTM is not a thing. UTM is a journey.

It is the transition from very manual, labour-intensive airspace management to interactions between airspace managers and industry, which is effectively a brand-new classification of airspace user. They have extremely unique needs, challenges, concerns, and characteristics to ‘traditional’ aviation.

The journey element is more important than any technology, especially today. The transition from today to tomorrow cannot happen at the snap of the finger or the drop of a hat, and as the CEO of a UTM company which has deployed production UTM systems in multiple countries at national scale, I can categorically say every customer has different challenges, requirements, and aspirations.

UTM, or U-Space (whatever your preferred parlance) describes a set of digital services and a set of interface requirements for UAS (Unmanned Aircraft Systems) to interface with ATM systems. Therefore, there is a requirement for an operating system which enables the deployment and adaptation of these new capabilities over time, bringing data from multiple systems together, whilst exploring and launching new opportunities and services.

I’m sorry to say it is not.

At Altitude Angel we have seen at least one RFP in the last 12 months where the ANSP has wanted a UTM system but stated it should not be connected to the internet. This is a practical demonstration of a common, but fundamental, misunderstanding among ANSPs due to being led by traditional aviation industry suppliers.  It also plays to the ‘on-premises’ mindset, which will not allow an ANSP to realise any of the benefits of UTM.

We have also seen some initial workloads – simple things like authorisation – have artificially imposed barriers to entry from an RFP perspective, so as to lock out early-stage companies which don’t have EUR20M+ annual revenues. There is an irony here in the ANSP will end up paying factors more for a poorer overall ‘solution’ with a supplier which is putting account protection ahead of a customer’s needs. But this is sadly also quite common, and we wish ANSPs would be more cognizant of it.

At its heart UTM is about better information flow and better communication between two distinct boundaries: the traditional systems used in aviation management, e.g., those in a tower, or sensors across an ANSP’s estate, and an entire ecosystem of innovators: from new vehicles, their operators/pilots, to software developers and fleet management companies, all need common interfaces.

There is an amazing opportunity for ANSPs to scale from one customer set (airlines) to potentially millions, by maximising the value of their existing estate and assets

ANSPs have a limited range of ‘customers’ or ‘users’ today. Tomorrow, it could easily jump to millions, and many ANSPs today are unprepared to deal with this on several levels, but most fundamentally, a technical one.

Unfortunately, we have seen some who believe the best solution to host a national UTM framework is on some servers they have got in a basement datacentre, because it is ‘ATM-grade’, when others have embraced the advancements and service reliability characteristics which intelligently designed, disposable yet highly fault-tolerant cloud-compute services offer.

Those ANSPs which will thrive in the future will be those which can successfully continue to serve a traditional aviation community while embracing the requirements of the new, and successfully combining them.

This does not have to be complex, difficult, or even expensive: transitioning to UTM technologies means embracing new ways of working, often which are substantially more cost-effective. It is also possible for ANSPs to monetise the earliest UTM services today, much like they do for traditional services they provide to airlines. Do not be fooled by the occasional ‘louder’ ANSPs that claim ‘UTM is live!’ and then ‘but we couldn’t monetise it’ because those implementations turn out to be… Yes, you guessed it, not UTM.

To remain relevant, and even become a key player in the future of aviation, ANSPs need to adapt, to realise their ‘front door’ is changing, and the time to start laying the right foundations is now.

At a time when the global aviation industry has just seen how incredibly reliant it is on two things – the flow of tourism and the availability of personnel to manage air traffic – isn’t it time to start embracing the switch to digitalisation and introducing UTM services as a cost-reduction, business-continuity perspective, if not one focused purely on the introduction of UAS into the airspace?

So how does Altitude Angel plan to help?

Over the coming weeks the company will release three white papers which will outline in more detail our position on UTM and how it can help ANSPs garner a greater understanding of what it entails, how it can be deployed and finally, how UTM can become an important revenue stream in 2022 and beyond. More than anything else, it hopes the white papers will help bring some truth and reality to a heavily marketed concept, so more informed choices and be made which will be better for everybody, including the market.

In conclusion, it was amazing to get back to Madrid and see so many face-to-face. The industry is still confused about UTM, but Altitude Angels aims to bring clarity and understanding in order to bring amazing innovation to all corners of the globe.