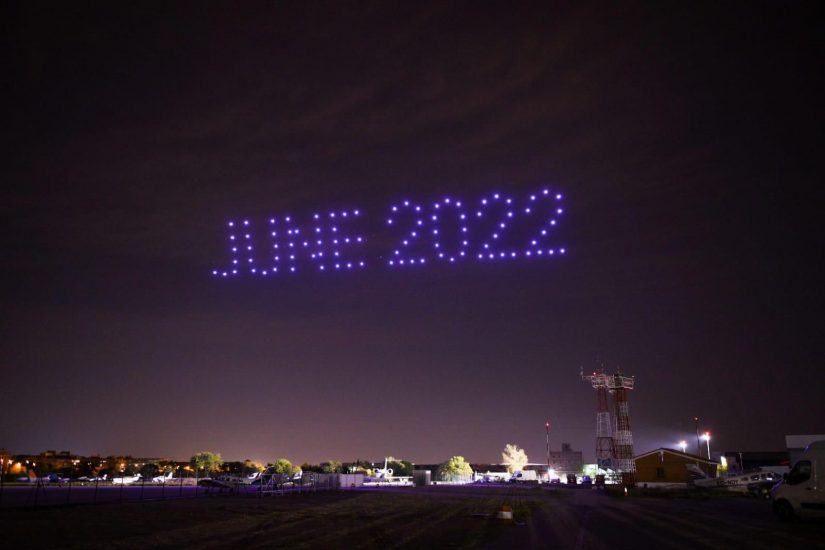 On the final day of World ATM Congress 2021, a complex operation involving more than 10 unmanned flight operations was conducted at Madrid’s Cuatro Vientos Aerodrome. The demonstration accommodated both civil and military aircraft and drones in an active airport airspace at the same time. The flights included cargo transport flights, artificial intelligence applications, computer vision, indoor flight, and races. Demo Day and World ATM Congress came to a close with a spectacular light and sound show with a swarm of 100 synchronised drones.

To kick off the flight demonstrations in the morning, a drone from the Italian startup ABZero was the first to take off at Cuatro Vientos Airport. The delivery aircraft carries medical supplies and was loaded with a Smart Capsule, which maintains necessary conditions for safe delivery of blood for patients needing transfusions.

Portuguese company Connect Robotics carried out a parcel delivery demo with a drone, thanks to artificial intelligence software.

The French company Elistair showed a UAV of its own manufacture. The ORION 2 is a captive drone with a flight range of more than 24 hours thanks to the ground station. It is used for surveillance tasks and can detect a car at 20km and a person at 10km.

Estonia’s Krattworks, specialising in firefighting, flew a demonstration and captured images, while the Spanish firm STAREA carried out an autonomous flight test of a VTOL (vertical take-off and landing and horizontal flight).

Throughout the demo day, the Local Police of Madrid set up a tethered drone fed through a copper wire, which broadcasted the afternoon activities on a large screen. The broadcast also featured footage from a flight of the Elios 2 (flyability.com/elios-2) drone. This UAV remotely inspected the interior of an airplane.

UMILES, the largest remotely piloted aircraft services consortium in Spain, and sponsor of the Expodrónica Pavilion, carried out the three most spectacular tests in the afternoon: the simultaneous flight of two Saturn drones designed for surveillance, inspection, security applications. and emergency. Besides, we could see a FPV race between two drones that fly in acrobatic flight way, with speeds of up to 150 km/h.

All the flights carried out were coordinated with the civil and military authorities to guarantee the safety of the first combined operation between drones and traditional aviation, as well as the normal development of scheduled flights.

Demo day was organized by Expodrónica. “These drone flight demos in regulated airspace along with civil and military aviation are a great example of the union between the UTM and ATM sectors. It is not only possible but already a reality,” said Isabel Buatas, director of Expodrónica.