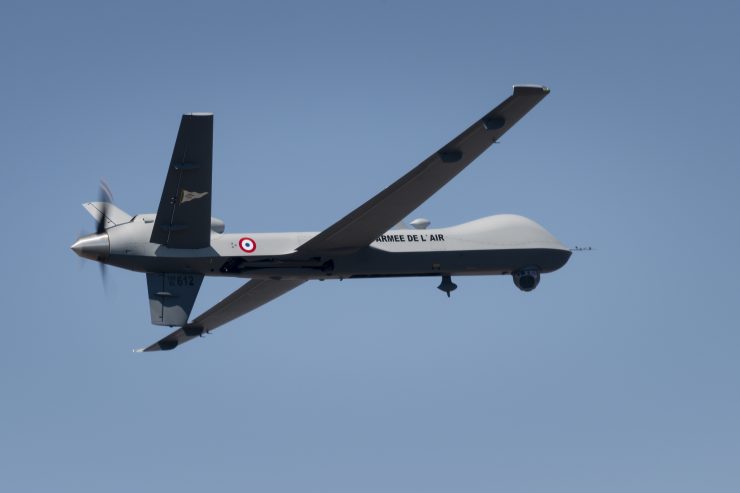 Bordeaux and Marseille control centres (ACCs) controlled a military MALE drone in their airspace FL145 / FL230 in a safe manner on the 19 May 2020 for a period of three hours. The country’s civil and military authorities are very much committed to participate in the development of a European regulation to integrate MALE RPAS in civil air traffic in non-segregated airspace.

For a training mission with an AWACS in a military area (TSA) located in the South-East of France, the French Air Force flew the REAPER RPAS, based in the military airbase of Cognac, in civil air traffic beyond segregated airspace. Prior to conduct this trial in a safe manner, the National Supervisory Authority had validated the safety study.

Bordeaux and Marseille ACCs controlled the REAPER without specific onboard equipment such as a ‘Detect and avoid’ system, between FL 145 and FL 230, and successfully performed handovers between civil units and military units in lower and upper airspace. The REAPER performance was equivalent to those of regional aircraft.

The French air navigation service provider DSNA says the initial feedback of this live trial is promising. It said the RPAS demonstrated that it could fly on its planned route but also evolve like a manned aircraft under this real-life operational conditions, for example when in the tactical phase, the controller gave a new heading instruction for a direct route.

DSNA, the French Air Force and the French military aviation authority have been performing test flights to assess accommodations of RPAS within civil IFR air traffic including coordination, transfers and abnormal modes since 2017.

General Reutter, director of the French military authority, welcomed this event. “With this operational exercise, we can confirm risk analysis under the auspice of the European Defence Agency (EDA). We are proud that these results can feed the guidelines for accommodations from the EDA and EASA. They will participate in the current working on the part ‘Certified’ of the ongoing civil drone European regulation and should facilitate the implementation of the Europen MALE program.”

DSNA Director Maurice Georges said: “The French civil and military authorities are very much committed to building a safe, fair and efficient airspace for both manned and unmanned operations. Moreover, DSNA actively participates in the SESAR program to enable RPAS insertion in nominal and emergency conditions in controlled airspace. The results of this trial will be very helpful.”

A new, more advanced experiment with cross-border operations is planned towards the end of 2020.