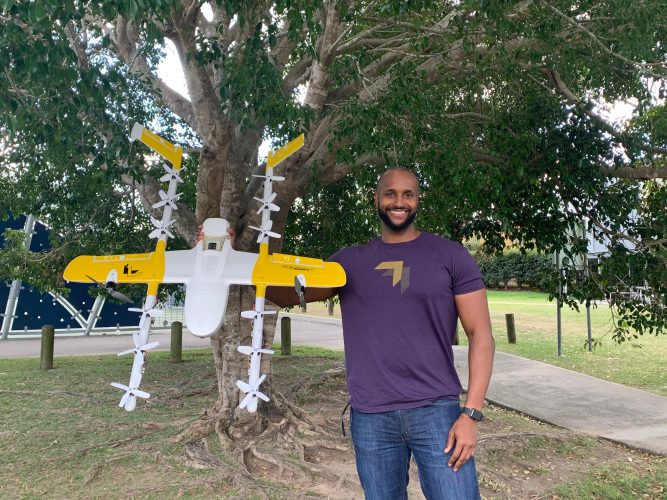 Following the launch in April 2019 of the first Australian commercial drone delivery service, Wing announced plans on 31 July to expand operations into one of the fastest growing communities in Australia, the Queensland city of Logan.

The Wing service launched in Canberra and after four months Head of Australian Operations Terrance Bouldin-Johnson believes that the model they have developed there is ready to be deployed in a new location. The Canberra service is also about to expand its reach and Bouldin-Johnson says that they could not be more pleased with how the community and the merchants have accepted the drone delivery concept.

“I would describe it as going very well and the feedback we have gotten from the community has been overwhelmingly positive,” he says. “We added another three merchants yesterday, which brings us up to a total of fifteen, and we are extending to our fourth suburb so we are really happy with the results so far.”

He says that the majority of customers order multiple times a week and that as a resident of the delivery zone he hears first-hand about how the drone deliveries are making a difference to his neighbours lives.

“Most recently we had a customer with a newborn baby, just three weeks old, and she ran out of coffee,” he explains. “She was able to put in an order via our app for a new bag of beans and get that delivered without ever having to put the infant in the car and leave home. That’s one of the biggest things we think we can give back to the community and that’s their time.”

Community engagement and feedback is one of the pillars for Wing and Bouldin-Johnson says that without it they would not have been able to have such a successful start in Australia.

“I can say that, living in the community myself, my neighbours are coming to me asking me if they can be on-boarded and we do community stalls all the time with live demos to make sure that folks see and get used to the drones,” he says. “We listen to our customers and we listen to feedback that we get and act on it.”

Unsurprisingly he is not forthcoming with delivery numbers in Canberra and says that at this early stage volumes are not the metric they are focussing on.

“We have focussed much more on community impact and providing a good service and we’re very happy with where those things are sitting,” he says. “We’re happy with the numbers of purchases we have been able to impact and the number of customers that are enjoying the service.”

Turning to the push into Queensland, he says that there are a lot of similarities in the demographics in both Logan and Canberra and that they picked the new location after considerable research and reflection on what had worked so far.

“We are very excited to be going into Logan, which has some of the fastest growing suburbs in Australia and the demographic there really matches some of our highest users and the folks that get the most use out of the service here in Canberra,” he says.

“Another big piece that contributed for Logan, more so at the state level, was because the Queensland government recently launched Australia’s first Drone Strategy and we are really excited to be part of that and that made it extra appetising for us,” he says.

Wing spent some years in Australia testing out the drones and the service and now they have a model that allows them to launch in new locations in a relatively quick and straightforward way.

“We are very happy to take all of the learnings from the past six years so we can start from a position of we know these things and it works in this way so let’s launch that there,” he says. “We don’t want to re-invent the wheel but we are still taking our time and with the support of the Queensland government and Logan council we will work with the community and understand what they need.”

In terms of regulations, the lack of encompassing national standards for drone delivery means Wing is required to repeat the processes it navigated in Canberra before it can commence operations in Queensland.

Bouldin-Johnson says this was not unexpected and that he believes that Australia’s Civil Aviation Safety Authority (CASA) “is a very forward thinking regulatory body” and that “with CASA we just moved to where we have gotten a little quicker” than in other parts of the world.

CASA Corporate Communications Manager, Peter Gibson said that for each new location a drone delivery operator wants to service they need to apply to CASA for approvals. In the case of Wing, who already have approvals for Canberra, he said it will not be a new approval but a variation to the existing one.

CASA has a set of regulations in place for commercial drone operations but what is most likely needed for drone delivery are certain exemptions from these rules, such as “the ability to fly within 30 metres of a person”.

Gibson says, “It’s kind of like an airline needs an approval if they want to fly to a new port” and that although it is up to the applicant to determine where they want to operate they will need “a location specific approval” from CASA before they can start.

Wing are currently going through this process for Logan with CASA and are also in discussions with Logan Council and the Department of Infrastructure, Transport, Cities and Regional Development for the necessary authorisations.

“We will start deliveries in Logan in the coming months from our new distribution centre, where we will be co-located with our merchants. We’ve been able to do that very well in Canberra and the merchants are enjoying the process,” Bouldin-Johnson says.

Looking at what is popular in Canberra, it is no surprise that coffee, bread, takeaway, snack foods and small pharmacy items are most ordered. “You might get your favourite thing a few times in a row but it’s that thing you need in the moment that folks have really found valuable, like milk when you don’t have it first thing in the morning,” he adds.

Currently Wing has a maximum load of 1.5kg but rather than see that as a limitation Bouldin-Johnson believes it is the ideal size for the market they are targeting.

“We think it really hits that sweet spot of what our customer may have forgotten when they were out shopping or for small home goods you need at the last minute,” he explains. “We have a hardware vendor, so it’s like you went there for a big order but then you ran out of screws at home, you don’t want to go all the way back so we can deliver those screws.”

“We always want to improve distance, range and payload but we really see ourselves as that last mile delivery,” he says. “We are very concentrated on the individual consumer so we will continue to evaluate our package size and I wouldn’t expect it to remain 1.5kg for ever.”

Asked about the biggest challenges of setting up in Australia he said that they were all about avoiding running into anything that can derail what they are doing.

“We are currently active in the US in Virginia and in Finland in Helsinki and they are all very similar models but we want to know how each community is different and that what we are doing is really tailored for the community and the customers we are going to be dealing with in those areas.

“We want to spend the next few months focussing very heavily on Canberra and Logan, and we want to expand from the suburbs we are already in. We are always looking at what other opportunities are out there but we really just want to focus on what we are bringing to these customers for now. I can’t share any details now but watch this space!”