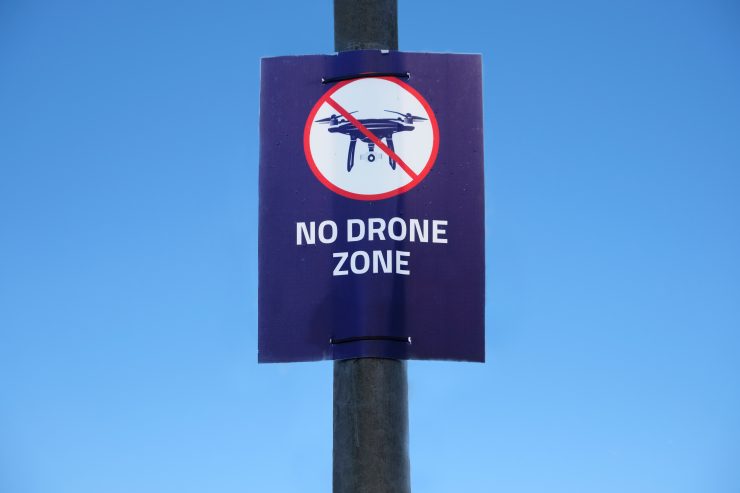 Following the introduction on 13 March of legislation extending the no-fly-zones around UK airports from 3km to 5km, the UK’s air navigation service provider NATS is currently working on developing a new airspace authorisation process which could speed the authorisation of legitimate drone flights within the new extended no-fly-zones and in other sensitive airspace areas.

The new authorisation process will come in the form of an app which NATS is planning to offer drone operators located near the UK airports where NATS provides air traffic control services. The system should go live late this year, according to Andy Sage, head of drones at NATS.

connected to the NATS core UTM data platform, part of a wider programme to ensure drone operators can choose from a number of competitive UTM service providers.

NATS and its strategic UTM partner Altitude Angel are developing a UTM data exchange platform which will allow other UTM serve providers to connect to the nationwide airspace authorisation system. “We hope to offer this service, free-of-charge as it is part of our regulated business, for visual line of sight (VLOS) drone operations later this year,” said Andy Sage.

On display at the World ATM Congress in Madrid Frequentis and Altitude Angel, partners in the Operation Zenith UTM development programme with NATS (https://www.unmannedairspace.info/uncategorized/operation-zenith-provides-landmark-demonstration-utm-technology-capabilities/) showed their latest version of their UTM concept which integrates drone operations within existing air traffic management infrastructure – providing displays, a communications system and electronic flight strips which controllers can operate with a minimum of training. It is based on a strategic and tactical “rules based system” so only pre-approved drone flights with authorised flight plans are permitted to take off.

NATS is also working on the next iteration of the UTM system which will allow for commercial beyond visual line of sight (BVLOS) flights.

“NATS’ vision is to develop a surveillance system which will extend airspace oversight and guardianship to very low level airspace areas for both general aviation and drone pilots,” said Andy Sage. “We envisage using a combination or primary radars, ADS-B (conventional and low-cost), 5G  – blending all the available sensors and to have it in place within the next five years.”

Meanwhile, according to a UK Department of Transport press release, on 20 March 2019 UK Aviation Minister Liz Sugg met with global leading drone manufacturers to discuss how to tackle criminal drone use. They were expected to discuss a range of topics including counter-drone technology and software such as geo-fencing that could be built into drones at the point of manufacture. Transport Secretary Chris Grayling said: “The UK has been consistently at the forefront of legislation to tackle drone misuse. All drone users should be aware that flying a drone within 5km of an airport or over 400ft is a serious criminal act, one which could put lives at risk and risks penalties ranging from significant fines to a life sentence.

Aviation Minister Liz Sugg, said: “The new Drones Bill, which is currently being drafted, will give new powers to the police to clamp down on those misusing drones and other small unmanned aircraft – including the power to access electronic data stored on a drone with a warrant. It will also include stop and search powers for drone users near aerodromes.

The Home Office is also reviewing the UK’s approach to countering the malicious use of drones, and will consider how best to protect the full range of the UK’s critical national infrastructure