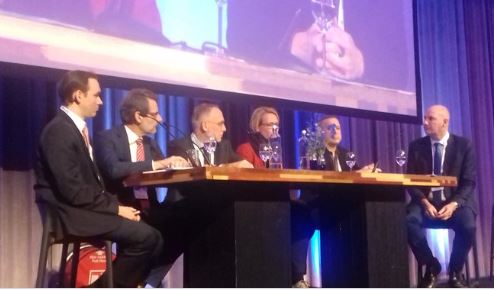 At the EASA High Level Conference on Drones, taking place in Amsterdam 27-28 November, UTM experts outlined what they thought was missing from the current regulatory and institutional proposals for Europe’s U Space UTM programme.

Marc Kegelaers of Unifly suggested that for U Space to take off what is needed are good implementation rules, acceptable means of compliance and an understanding on the best way to track drones using certifiable standards and methods. There was still no clear regulatory frameworks covering how UTM service providers would work together and how these services will be monetised and service levels monitored.

Nor was there any clear view of how local authorities would be integrated into urban air mobility programmes.

Angela Kies of DFS said that U Space components were quite fragmented- with different countries providing small service demonstrations in different areas. For DFS, situational awareness is the basis for safety and the work that DFS had done to fuse the data from Deutsche Telecom mobile network services with traditional ANSP derived surveillance data would provide a fundamental technology enabler for UTM, including the management of beyond visual line of sight (BVLOS) flights. ANSPs would have to play the key role in integrating data from IFR, VFR and military traffic.

So will UTM deliver natural monopolies such as ATM or will everything be competitive?

The way things are going, said Marc Kegelaers, is that we will have a very competitive airspace with multiple suppliers but ANSPs will have at least one fundamental role – coordinating with ATM. The rest will depend on their business cases.

But this left some panelists wondering how and where UTM service providers would compete in different countries. Joachim Luecking of the European Commission’s DG Move said he would prefer to see UTM systems offered by multiple suppliers in a competitive way.

Olivier Rea of Thales suggested that instead of trying to find the perfect business model for each country, there should be a focus on the delivering the principles of UTM, such as equitable access to airspace. UTM is not manned aviation, where the whole industry is holistically regulated – it would make sense to go step by step down the road to regulation

Sean Cassidy of Amazon Prime Air asked what will happen after the U Space network of demonstrators finishes its work – or has some thought been given on how to scale up these operations? Much of the technology is already there, he suggested, and said infrastructure providers could be managed like mobile phone networks but with the proviso that if one failed another would automatically become available