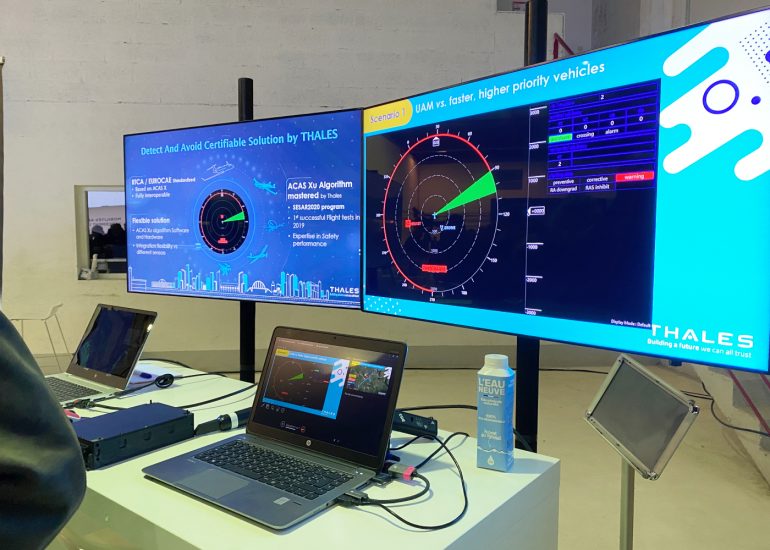 The Île-de-France Region, Choose Paris Region, Groupe ADP, and RATP Group launched the first urban air mobility (UAM) trials at Pontoise-Cormeilles-en-Vexin Airport, located about 35 kilometers (22 miles) northwest of Paris, at the end of November 2021. Volocopter plans to be the first to start flight trials as early as 2022, with other eVTOL manufacturers joining shortly afterwards.

Thales Detect & Avoid system was one of the live demonstrations at the event. Three potential collision scenarios were demonstrated using two helicopters — one standing in as an eVTOL aircraft — and a small drone. This type of system is expected be to feature as the low altitude airspace gets busier with manned and unmanned traffic.

French Minister Delegate for Transport Jean-Baptiste Djebbari announced that the first UAM pre-commercial demonstration trips are planned to be flown between Issy-les-Moulineaux heliport in Paris and Saint-Cyr aerodrome, and between Paris-Charles de Gaulle and Le Bourget airports and vertiports in central Paris. He stated that France should not wait for others to shape this industry but instead, should be one of the leaders. He believes that this work should be coordinated at the European level and that the vertiport at Pontoise was a concrete example of this cooperation.

The Thales system works similarly to airborne collision avoidance systems (ACAS) used in commercial aviation today, and will also take into account the maneuverability potential of eVTOL aircraft. Skyports also flew its drone on a 7-km circuit around the airport. Integration of drone traffic with eVTOL air taxi services will be another airspace interaction that will be tested in the trials at Pontoise.

Pipistrel Aircraft’s Velis Electro, the first fully-electric aircraft certified by the European Aviation Safety Agency (EASA), demonstrated the potential future for electrification in general aviation. Zero local emissions and a noise level that was drowned by camera shutter noise when the aircraft flew just at a few hundred meters is something that must be witnessed in person to be appreciated.

Airbus and Volocopter were both present with their full-size flying prototypes, the CityAirbus and VoloCity respectively, and Airbus also displayed a scale model of the CityAirbus NextGen. Both aircraft are expected to participate in the flight trials. Vertical Aerospace had a model of its VA-X4 on display and has also signed up to test its aircraft at Pontoise.