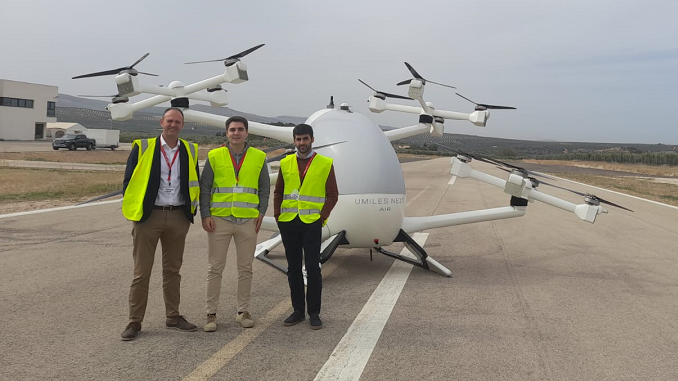 Enaire is acting as the national coordinator for the U-ELCOME project, led by Eurocontrol, with eight locations in Spain, five in Italy and four in France. One of SESAR 3 JU’s flagship Digital Sky Demonstrators, the U-space project U-space European COMmon dEpLoyment (U-ELCOME) has a budget of 14 million euros and is supported by the European Commission’s Connecting Europe Facility. U-ELCOME is a 3-year project running until October 2025 coordinated by the Eurocontrol Innovation hub and involving 51 partners.

U-ELCOME aims to set up, deploy and demonstrate up to Technology Readiness Level 8 several breakthrough U-space U1 and U2 solutions that will combine digital and physical infrastructure capabilities. This will enable investment to be accelerated and new solutions deployed.

Enaire is a participant in other SESAR 3 U-space projects, including AMU-LED and Uspace4UAM.

In June 2022, Spain’s Ministry of Transport, Mobility and Urban Agenda (Mitma) published the U-Space National Deployment Plan in Spain (PANDU) which designates Enaire as the sole common information services provider (CISP) to disseminate static and dynamic data that will allow U-space services to be provided.

Uspace4UAM demonstrations at the ATLAS Centre in Villacarrillo, Jaén involve both drones and urban air mobility (UAM) vehicles. They cover different use cases, including mixed operations, so the project can collect results that are applicable across Europe. The goal is to increase social acceptance by users to allow U-Space and the autonomy of these aircraft to develop sufficiently to show that their onboard systems are suitable for U-Space services and provide the required safety levels. At the ATLAS Centre in Villacarrillo, ENAIRE and the other Uspace4UAM members hope to demonstrate the benefits of using a U-Space platform and its associated services to manage a large number of remotely piloted aircraft (UAS) and air taxi operations.

Case 1: Creation of a geo-fence

A helicopter needs to land in a U-Space area within a controlled airspace. ENAIRE’s air control creates a geo-fence that virtually restricts the landing area to keep drones out of that airspace. The geo-fence is shown to interfere with the route of an air taxi, which deviates around it. Once the helicopter is on the ground, the geo-fence is deactivated.

The system on board the air taxi detects a conflict with an intruding drone in controlled airspace and must perform an evasive manoeuvre that will force it to exit the defined flight corridor. ENAIRE air traffic controllers coordinate with nearby (simulated) aircraft and the air taxi returns to its approved route once the conflict clears.

Case 3: Route change due to unavailability of destination vertiport

The air taxi sees that the destination vertiport is not available and must change its flight path to a secondary vertiport. To do this, ENAIRE’s air control service creates a dynamic corridor that protects the operation to the new destination and coordinates with nearby manned aircraft. All of it simulated.

ENAIRE is studying how the benefits of the U-Space system in controlled airspace will allow processes that are now manual to be automated, and response times to be improved. Similarly, the desired safe integration of drones and manned traffic will be subject to coordination between air navigation service providers. Uspace4UAM has a budget of 4 million euros from Horizon 2020 European research funds, within the SESAR Joint Undertaking public-private partnership, and is led by Honeywell. Uspace4UAM studies operational concepts, regulations and standards for the safe and orderly integration of UAM into daily air traffic. It is doing so with a forward-looking consortium of cities and air navigation providers, such as Austro Control, Air Navigation Services of the Czech Republic, and ENAIRE, national regulators and the European Aviation Safety Agency (EASA), a manager of unmanned air traffic, as well as manufacturers of eVTOL (electric vertical take-off and landing aircraft), research centres and technology providers such as CRIDA, ENAIRE’s R&D subsidiary, the Polytechnic University of Madrid, and Ineco, which is responsible for collecting the data.

Earlier this year, ENAIRE participated in the demonstrations in Santiago de Compostela and the Rozas aerodrome in Lugo of the AMU-LED project, financed by the European Horizon 2020 programme and led by NTT Data, which relied on the GammaSim control simulation tool and air traffic controllers at the Santiago Airport to test the integration of an emergency helicopter and five drone operators in controlled airspace in various scenarios.