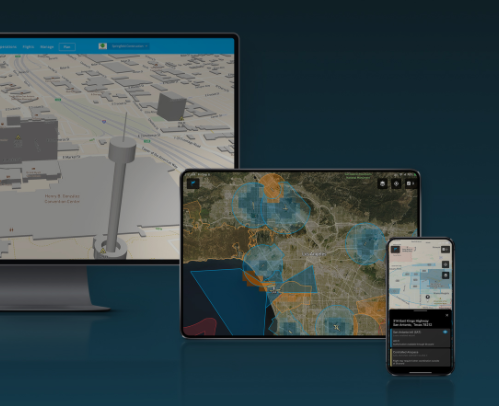 A Skyward article comments on the potential benefits of commercial wireless spectrum for beyond line of sight (BVLOS) remote drone operations. According to Skyward:

“Thanks to a temporary waiver granted by the FAA, Skyward drone pilots were able to conduct entirely remote flights, with no onsite crew, in order to inspect Verizon infrastructure near a wildfire. The pilots were stationed in their home offices, dozens of miles away from the fire.

“This was possible because of more than a year of systems implementation and testing at our Aviation Development Center in Portland — and because Verizon’s cellular and fiber networks connected the systems.

“We’ve built a BVLOS capability consisting of a remotely deployable drone system, weather monitoring systems like those used at airports, Skyward’s Aviation Management Platform, and state-of-the-art airborne safety systems that allow us to check the surrounding airspace for other aircraft,” said Skyward’s Director of Aviation Development Centers, whose name is X. “Verizon’s 4G LTE network connected these systems, giving the team’s operations lead in Alaska a near real-time picture of the operation from 1,600 miles away.” In the near future, we expect operations like this to become entirely routine.

“That is exactly where commercial wireless spectrum shows great promise.

“Part 107 regulations for small drone operations are silent as to the specific means of command and control. As long as the pilot can meet the requirements of Part 107, there are no rules imposing a particular spectrum band or type of spectrum.

“FAA Part 107 regulations require that drone operators maintain line of sight to the drone, but physics generally limits the distance for effective radio frequency (RF) communications. Alternatives to RF command and control include programming fully autonomous operations or using cellular networks to transmit signals long distances. The latter is exactly what Verizon’s cellular network is. This type of nationwide network is essential to unlock the potential of BVLOS.

“Cellular networks may not provide the most suitable command and control spectrum for every user in every corner of the United States for every operation. But operating fleets of drones BVLOS will require a nationwide, reliable network, and Verizon has the nation’s largest, most reliable cellular network. It covers over 98% of Americans, particularly in populated locations where drones operate most often.

“Verizon understands what it means to build, maintain, and ensure the network works as it was designed. As the network provider for countless first responders and public safety professionals, we also understand the critical importance of our network.

“Verizon has the resources to maintain a robust network, and Skyward is working to enable cellular connectivity for drones. We are flying drones today using cellular command and control, and we are working with both the FAA and FCC to collect and analyze voluminous data. We are also partnering with customers and other industry leaders to unlock the economic potential of BVLOS. Whether it is a miles-long inspection of a utility transmission corridor with a fixed-wing aircraft or multiple drones delivering packages in suburbia, our tests are addressing multitudes of use cases that BVLOS drone flight could make a reality.

“Beyond demonstrating to regulators the capabilities of cellular command and control, this testing will also help develop industry standards for safe flight over cellular. Most of this work won’t ever be visible to the public — ensuring non-interference among FCC license holders, drone interoperability between carriers, or determining connection requirements. Other results will be purpose-built for the consumer — how to assess flights that are safe for BVLOS. The work we’re doing today will enable the key drone capability of the future: flights beyond the visual line of sight.”