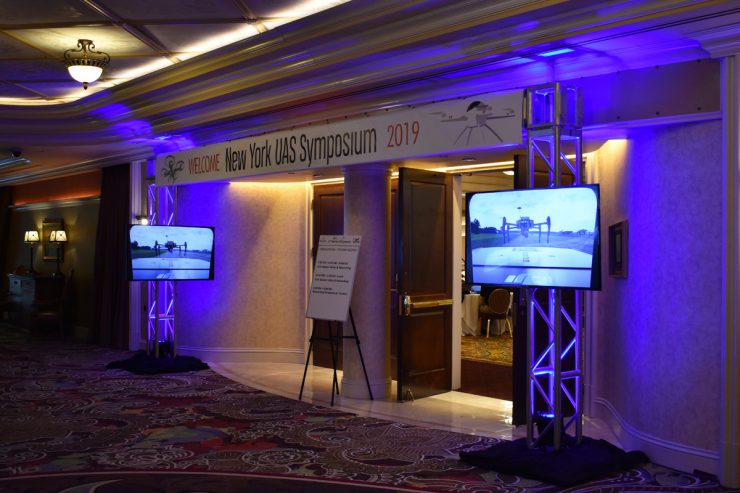 In a press release the coalition wrote:

“The symposium was kicked off with welcoming remarks from NUAIR CEO Mike Hertzendorf and Oneida County Executive Anthony J. Picente Jr. Congressmen Anthony Brindisi (D-22nd District), and John Katko (R-24th District) had a moderated conversation on the ever-growing drone industry and the significant investment and support New York State has contributed to Central New York. Houston Mills, V.P. of flight operations and safety at UPS was Tuesday morning’s keynote speaker, showcasing how UPS is currently using drones in their daily operations and what’s in store for the future of drone package delivery by UPS. Three Separate Videos were shown, showcasing the vast technologies and capabilities of New York’s 50-Mile UAS Test Corridor being developed between Rome and Syracuse, New York. The first video showcased multiple UAS Service Suppliers (USS) communicating with each other for safe flights and how public safety personnel can implement a “no fly zone” of airspace, in the case of an emergency where a public safety drone is being deployed.

“The second video was shot in downtown Rome, during a farmer’s market event to showcase UAS traffic management capabilities in an urban setting. Technology showcased in this video included communication and detection of manned and unmanned aircraft in the same airspace and how unmanned aircraft handled each situation.

“The third video showcased multiple Remote ID solutions from partners that are integrated into the New York UAS Test Site. Remote ID is like a “license plate” for a drone, which allows public safety personnel the ability to identify a drone in the air, who’s flying it and physically where that person is piloting the aircraft. This is another key technology being developed at the NY UAS Test Site, which will help deal with “rouge” drones flying in unauthorized areas.

“The day was filled with multiple panel discussions led by UAS industry experts which discussed many of the key issues facing the UAS industry, including cybersecurity, urban air mobility, weather, remote ID and more. Multiple UAS industry vendors were also setup throughout the conference for participants to learn more about their technologies and advancements.

“The final day of the Symposium focused on the multitude of industries involved with unmanned aircraft systems. A full day lined with individuals from across the United States in the fields of higher education, public safety, tech startups and more to discuss their involvement with the UAS industry. The day was opened by CenterState CEO President & CEO, Rob Simpson, followed by keynote speaker Jamie Winders, director of the Syracuse University Autonomous Systems Policy Institute (ASPI). The day included three Plenary Panels, a “Lunch & Learn” and time to visit UAS vendor tables, network with industry experts and see how New York is becoming the center for UAS development and integration”.