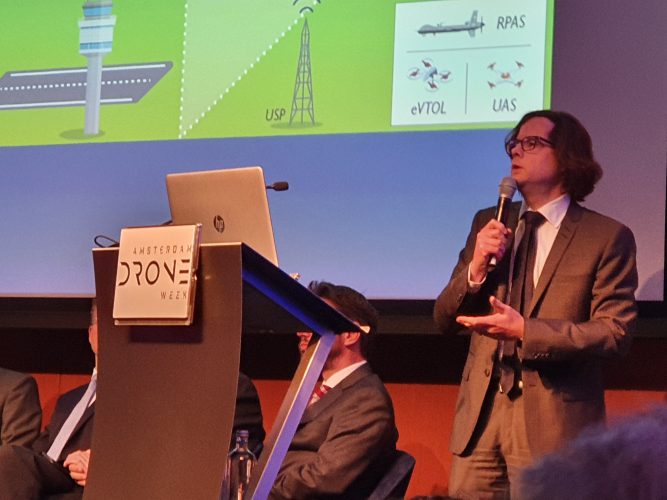 There is a clear need for separation between UTM and ATM controlled airspace – air traffic controllers do not need to see every drone in the neighbouring airspace but the challenge will be for U-Space operators to manage the transition between the two regimes, according to Filip Cornelis, of the European Commission’s DG MOVE, speaking at the fourth meeting of U-Space network of demonstrators in Amsterdam.

But Antoine Martin of the DSNA argued that the challenge to integrate UTM and ATM was just too great and that it would take a decade to happen. The answer was to build an airspace management system in which all aircraft can be safely separated. “We already see manned and unmanned traffic integrated in controlled airspace, we just need to do it in a more efficient way.” There is no reason why we could not apply the same kind of collaborative decision making (CDM) procedures and technologies adopted by airports to link them into the European ATM network to the UTM and ATM scenarios, he said. “I have no problem if UTM service providers provide services in a built up area as long as I can do my job efficiently and this interface has been be agreed by both parties.”

According to Mark Watson of NATS in the UK there are over 300 drone infringements a year –  so the answer is not segregation, because drones won’t keep to segregated airspace, but more efficient airspace management architectures overall.

Andreas Lamprech, CTO of AirMap, said U-Space is an essentially digital concept and we first have to define the areas where controllers will no longer be responsible for controlling.

Other participants spoke of the difficulties facing aircraft operators in negotiating different bands of airspace. “It is going to be difficult for the pilot to move from ATM to UTM and then through the different UTM levels, with having to change frequencies and so on,” according to Jörn Jaeger of Volocopter.

Another debate arose around the issue of standards. UTM standards from ASTM International for remote ID broadcast services for operators using electronic devices, along with the sharing of networked remote ID data, are due to be published in January 2019 and they could provide the bedrock for European U-Space systems, argued some delegates, even though European organisations had played only a minimal part in their development.

Other speakers said that any standards endorsed by the European Aviation Safety Agency (EASA) would have to be proven in the European operating environment.  The European Commission had delegated the U-Space standards work to ASD Stan but using these standards under development for remote ID, for example, had not yet been tested in any of the U-Space demonstrator network programmes.