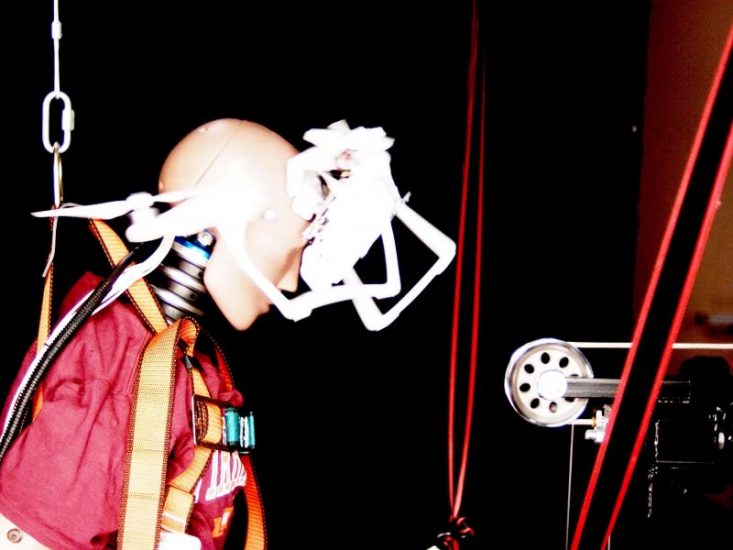 The US Federal Aviation Administration (FAA) has accepted test methods developed at Virginia Tech to demonstrate compliance with new regulations for a capability that’s crucial for the drone industry to expand: The ability to fly these aircraft over people. Virginia Tech is the first to achieve this acceptance.

The methods build on years of work by the test site, known as MAAP, and the group of injury biomechanics researchers led by Steve Rowson, an associate professor of biomedical engineering and mechanics at Virginia Tech. The partnership married MAAP’s experience evaluating risk in drone operations, which has yielded copious data on how and why an impact might occur, and Rowson and his colleagues’ highly regarded techniques for recreating impacts in a laboratory setting and correlating impact characteristics to injury risk. Fusing their expertise enabled landmark achievements, including the first nationwide waiver for drone operations over people and the first drone air carrier certification.

The means of compliance expands the highly specialized testing needed for specific waivers into robust, generalizable procedures that can be applied to a range of aircraft and a variety of operations.

Virginia Tech is now working with applicants like drone manufacturers to design and conduct testing for individual models of aircraft — the applicant will submit the test data to the FAA as part of a declaration of compliance with the new rule. In the process, the testing will continue to elucidate what it takes to fly safely over people.

“We’re really approaching this as a learning exercise,” Briggs said. “As we begin conducting this testing with various companies, we’re going to learn a lot about potential injury severity from small drones, including how it scales with size and design.”

The work is the latest win in a long-running collaboration between the MAAP test site and injury biomechanics experts in the Department of Biomedical Engineering and Mechanics. The two nationally recognized groups decided to pool their expertise to study the risks of drone-human impacts shortly after the FAA released its first set of commercial drone rules in 2016 — regulations which explicitly prohibited flights over people.

“MAAP exists to inform regulation,” Briggs said “One of our primary goals is to inform the regulations that will create a safer national airspace — and that includes people on the ground.”

The FAA’s release late last year of a rule for flights over people was a long-awaited indicator of progress in an industry where technological capability has typically outstripped regulatory approvals. The official acceptance of test methods — known in the industry as a means of compliance — adds practical value to the rule’s symbolic significance.

“The rule provided an understanding of what’s required to operate over people,” said Tombo Jones, the director of the Virginia Tech Mid-Atlantic Aviation Partnership, an FAA-designated drone test site. “But to utilize the rule, you need a solid process to demonstrate that you meet those requirements. That’s what this means of compliance provides, and it will make it possible to use drones efficiently and safely for a wider range of operations.”

According to a Virginia Tech blog, it reinforces Virginia Tech’s position at the forefront of drone integration, as the regulatory paradigm in the industry shifts to allow flights to become more routine.

The FAA has granted waivers to the provision when an operator has made a compelling case that their planned flights were low-risk. These waivers allowed the industry to expand — and, crucially, spurred research into effective test methods — but each waiver applied only to a narrow set of circumstances. Each new type of operation needed a separate waiver.

The new rule swept away the bulk of the red tape that characterized the waiver system by establishing a clear, universal standard linked to the injury severity. If a drone demonstrably wouldn’t cause injury above a certain level, it could be flown over people. (There are still some limits related to flying over large groups.)

“Transitioning from operating via waivers to operating under a rule means that you no longer have to petition the FAA on the safety of each operation on a case-by-case basis,” Jones said. “It makes it dramatically more efficient to scale toward more ambitious operations. It also reduces the business risk for drone manufacturers: Having a clear standard provides some assurance that there’s a well-defined pathway to being able to operate.”

The FAA released one means of compliance along with the rule: A simple formula that used a drone’s mass and speed to calculate the total kinetic energy the aircraft could transfer to a person during an impact — a metric correlated with the severity of a potential injury.

MAAP chief engineer Robert Briggs said that the formula can establish an upper limit for risk without having to conduct testing — but the underlying assumptions it uses also bars most drones from meeting the standard.

“That assumption is that your drone acts like a rigid object — that when it impacts a person, there’s no frangibility, no deformation, no complex dynamics happening. For some drones, that may be a valid assumption, but for a lot of them, it’s not,” he said.

During a real impact, a drone can deform, crack, or even break into pieces completely. These structural weaknesses are often engineered into the design, because they dissipate some of the kinetic energy that otherwise would be transferred to whatever the aircraft hit.

That lost kinetic energy provides the latitude that most commercial drones will need to meet the standard set by the rule. Virginia Tech’s test methods demonstrate how much energy a particular drone is likely to transfer under realistic conditions, and how that compares to a rigid object with a specified kinetic energy threshold.

(Image: Several years of research by the Virginia Tech Mid-Atlantic Aviation Partnership and the Center for Injury Biomechanics enabled the university to become the first organization to have test methods accepted by the FAA to demonstrate compliance with key regulations for drone flights over people)