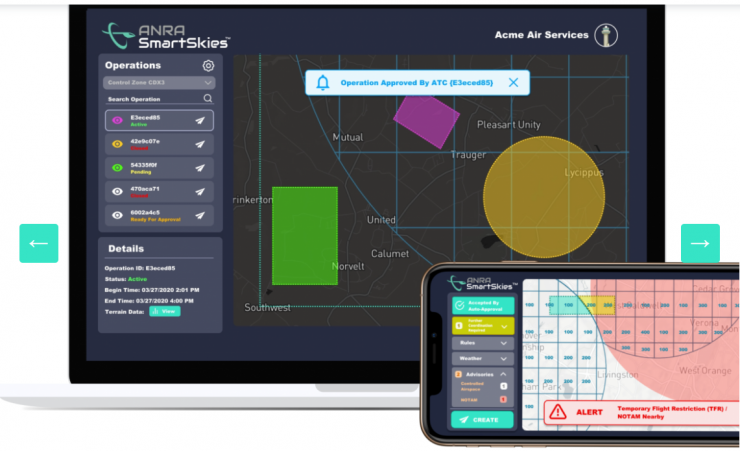 According to press release from ANRA:

SmartSkies software services are designed for the coordination, execution and management of drone operations in controlled and uncontrolled airspace. SmartSkies CTR specifically addresses airspace management for Airport Control Zones and other sensitive airspace.

SmartSkies allows drone pilots to obtain approval for drone operations within controlled or sensitive airspace using a simple mobile application or web portal. It provides real-time, automated processing of airspace authorisations based on criteria set by stakeholders such as Air Navigation Service Providers (ANSPs) or regulators. The ANRA app checks the airspace for any dynamic and static conflicts, and if none exist, airspace authorisation is automatically granted unless further coordination is required, whereupon the pilot receives an alert. Further coordination requests are routed to the relevant stakeholders, allowing multiple levels of coordination that can include airspace controlled by different agencies. SmartSkies is designed to reduce the burden on airport tower personnel, which benefit from having assurance that approved drones will operate in areas that do not interfere with other drones or manned aircraft.

SmartSkies built-in features include integrating data from existing aeronautical data sources and creation of custom dynamic airspace zones in addition to ingesting information from supplementary data sources like weather and terrain. It also supports drone tracking, traffic deconfliction, auditing, non-conformance alerts, geofencing, and electronic conspicuity for identifying drones and their pilots – all while adhering to privacy limitations within a secure system.

Based on feedback from regulators and ANSPs, ANRA added a feature for two-way text communication between drone pilots and airport towers. Only authorised tower personnel will be able to communicate with drone pilots using SmartSkies technology, helping to improve coordination during airport-related emergencies. In choosing to use open interfaces with this new offering, ANRA expands communication options and is currently researching improved human-to-machine interactions to ensure pilot flight safety.

Within the SmartSkies family of technology platforms are optional services that permit networked information exchanges between stakeholders, designed to enable shared situational awareness and capabilities. The technology also supports the integration of surveillance data using standard interfaces such as ASTERIX as well as tracking and conformance monitoring for drones. Additionally, it can support strategic deconfliction of drones from manned traffic, including in-flight deconfliction.

SmartSkies is available now and features a modular design intended support a broad spectrum of operations and readily scales for future innovation.

“We are proud to announce an addition to our family with the launch of SmartSkiesTM CTR,” said Amit Ganjoo, CEO and Founder of ANRA Technologies. “ANRA is addressing an immediate need with our cutting edge technology that meets today’s regulatory requirements. Now is the time to start implementing these capabilities for Airport Controlled Zones and other sensitive areas.”