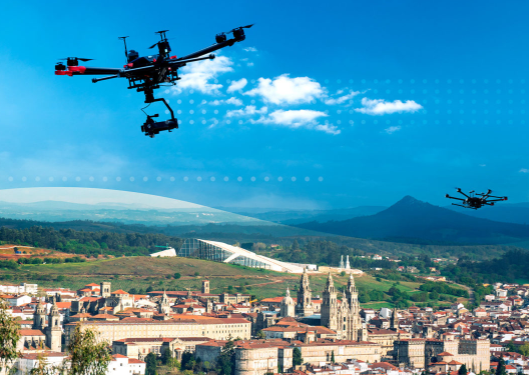 More than 16 companies are participating in the SESAR AMU-LED final demonstration on 28-29 September from Europe, China and the US to make multiple combined tests of both manned and unmanned flights within the U-space framework in Santiago de Compostela, Spain.

According to the press release, Some 30 operations will be coordinated by engineers and technology developed by the Technological Institute of Galicia (ITG) and NTT Data, using the AIRUS air traffic control centre to demonstrate latest advances in the following areas:
✔️ Identification and registration of drones
✔️ Geopositioning and aeronautical information
✔️ Resolution of flight plan conflicts
✔️ Flight tracking and monitoring
✔️ Traffic information
✔️ Interface with ATC (Air Traffic Controller)

The use cases that will be launched will be related to air mobility in urban environments in various sectors. Specifically, the operators will be ITG, AXEGA, Cranfield, Catec, INECO, EHang and Airbus, which will participate with simulated traffic. These operators will use nine aircraft to carry out inspection flights, aerial photography, surveillance, freight transport, air taxi service (simulated by restriction of the aeronautical authority), priority missions of public service or telecommunications. In this sense, Telefónica will test 5G capabilities in flight scenarios, an area of ​​great interest for the future development of U-Space.

The exercises carried out within AMU-LED include more than 100 flight hours combining different unmanned aerial systems and contemplate different scenarios, use cases and applications. Among them, simulated air taxi operations, cargo transport, delivery of goods and medical equipment, infrastructure inspection, police surveillance and support for emergency services. Through real tests and simulations, the project explores and demonstrates the benefits of decongesting roads thanks to air mobility, as well as improvements in the transport of people and goods, the reduction and flexibility of journey times and the reduction of pollution and traffic accidents.

Thanks to the data obtained from the different tests, AMU-LED will provide very valuable information to regulatory authorities such as EASA, with the aim of contributing to the development and establishment of laws and regulations in the field of urban air mobility. The complete and multi-disciplinary team of professionals at AMU-LED includes experts in air traffic solutions, simulation and drone operations, technological research centers, regulatory entities and experts in tests and demonstrators.

ITG is in charge of designing and coordinating the H2020 AMU-LED demonstrations in Spain, an urban air mobility project of the European Commission led by NTT DATA in the with the participation of 17 companies and institutions from Europe and the United States, which aims to demonstrate the safe and efficient integration of different types of drone operations in the sky of our cities and thereby contribute to regulatory and regulatory development.

This initiative includes one of the largest demonstrations of mobility services with aerial vehicles in an urban environment. Thus, after the demonstrations carried out in Cranfield (United Kingdom), Amsterdam and Rotterdam (The Netherlands), the last week of September AMU-LED stops in Santiago de Compostela, the only Spanish city that will host the demonstrations, coordinated by ITG, and in which will involve manned and unmanned aircraft, which will carry out more than 30 operations, both real and simulated, in a total of 11 vertiports distributed between the Cidade da Cultura, the Lavacolla airport; the soccer field of the University of Santiago and the base of the 061 helicopter in the Conxo Hospital.

ITG will coordinate all operations and demonstrations from an air traffic control centre, in which 30 engineers from different European countries and representatives of the project partners, the main players in the development of the drone industry, will participate. From this command post, the coordination of the different aircraft that will share the airspace in the cases of use that are carried out will be controlled, demonstrating the safe and effective integration of unmanned aircraft in it.

At the heart of the management center is AIRUS, a technological development of ITG and NTT DATA, which will make the orchestration of the planned traffic possible. It is a software that incorporates the latest advances in drone traffic engineering, safety SW, Cloud microservices, IA/VA and others, to provide functionalities to the management center such as identification and registration of drones, geopositioning, resolution of plan conflicts of flight, tracking and monitoring of the flight, traffic information, interface with ATC (Air Traffic Controller), emergency management, accurate and reliable aeronautical information, etc. The level of intelligence, security, automation and digitization of technology allow UAS traffic in complex scenarios, where surveillance is mandatory, such as BVLOS, airport environment,

ITG will also contribute its experience in defining scenarios and use cases, in addition to advising on issues related to airworthiness, safety, certification and operating permits.

AMU-LED has received funding from the SESAR 3 Joint Undertaking (JU) under grant agreement No 101017702. The JU receives support from the European Union’s @Horizon 2020 research and innovation programme and the SESAR JU members other than the Union.