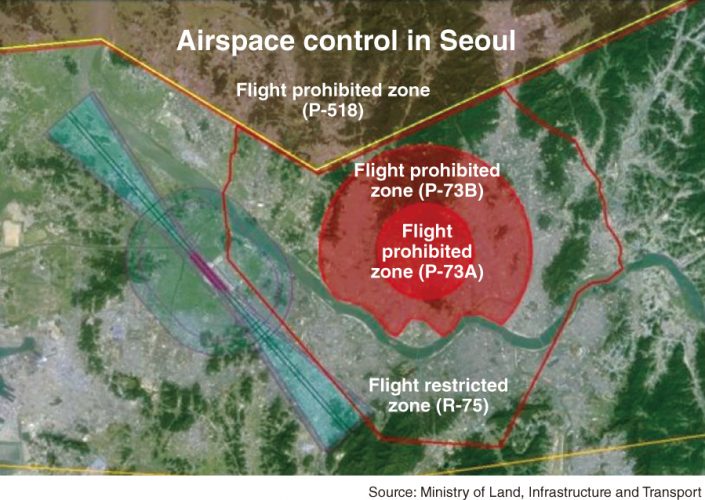 A report published in The Korea Herald  highlights discrepancies in South Korea’s rules covering the use of drones in public and commercial spaces. The newspaper says: “While the use of drones both in the public and commercial realms expands, South Korea has yet to develop a unified position on how to authorize them, particularly in the R-75 zone of restricted airspace in Seoul.”

The report goes on to say:

“According to the Aviation Safety Act, a drone weighing 12 kilograms or less (without fuel) and with a length of 7 meters or shorter doesn’t require authorization for flight as long as it stays under an altitude of 150 meters and keeps out of airport control zones and prohibited airspace. The “prohibited” airspace in Seoul is P-73A and P-73B, which encompasses the northern part of the capital overlooking the presidential office. Acting as a buffer zone around the prohibited space is R-75, which is defined as “restricted” airspace. The R-75’s parameter connects Gimpo Bridge to the west, Seoul Outer Ring Expressway to the north, Gangdong Bridge to the east and Seoul National University to the south.

“Legally, flying drones in the R-75 air space is allowed. However, the Ministry of National Defense says it cannot be allowed.”

“In R-75, drones need authorization for flights even if they’re not taking photos or videos. When a drone flying in the R-75 airspace is detected or reported, we track down the operator and confirm whether the flight has been authorized,” said an official from the infantry division.

“The Transport Ministry abides by the Aviation Safety Act, but in regards to drone flights in R-75, we follow the Defense Ministry’s guideline,” said Kim Young-ho from the advanced aviation department of the ministry.

The newspaper adds: “Though the Transport Ministry remains stuck on the discrepancy between the Aviation Safety Act and the Defense Ministry’s guideline, the Korea Drone Industry Association under the ministry says drones cannot fly in R-75.”

“It’s incorrect that drones can fly in R-75 without authorization. There are many people under the airspace and drones can potentially fall from the sky as their frequencies overlap with those of smartphones, so they need authorization,” said Park Seok-jong, president of the KDIA.

The newspaper reports: “With the ongoing government organizations’ discrepancies over the R-75 issue, the Seoul Regional Office of Aviation expressed concerns over drone operators’ rights.”

The newspaper adds: “According to the Transport Ministry, the number of registered drones stood at 10,021 as of August 2018, increasing more than tenfold from 925 in 2015. The number of licensed drone operators jumped to 25,740 from 872 in the same period. Despite soaring demand, scattered control over air control zones is hampering the authorization process. Nationwide, three regional aviation offices are manually handling drone flight authorizations in nine air control zones across the country, while 20 military bases are in charge of 22 zones, according to the Transport Ministry. The complex authorization system typically takes three days.”

The newspaper draws a comparison with the US Federal Aviation Administration which operates a unified, automated system called LAANC, or low altitude authorization and notification capability. Through the system, drone operators can use apps to request authorization from the FAA, and potentially receive it nearly in real time.